Civil war may break out in Macedonia

Term of an ultimatum, the Macedonian opposition presented the President of the country Gjorge Ivanov with, expires. He was demanded to give mandate to form government to its leader Zoran Zaev. 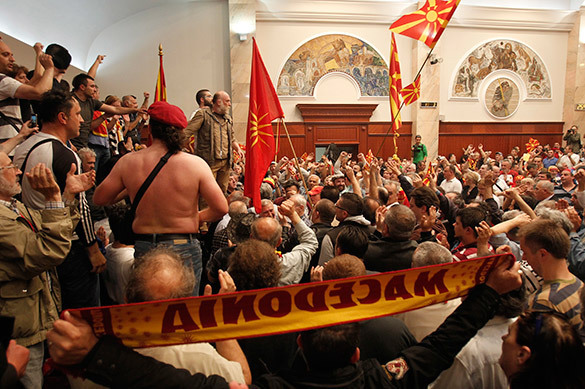 What will it lead to? Russia and the West have been drawn into the Macedonian conflict.

As Pravda.Ru reported, the ultimatum was preceded with a 'bloody Thursday': on 27 April about a thousand of adherents of the ruling VMRO-DPMNE party of former PM Nikola Gruevski broke into the parliament. They were indignant at creation of parliamentary majority out of social democrats and Albanian MPs, who elected a new speaker - leader of one of the Albanian parties - Talat Xhaferi. Opositional MPs were beaten up.

Zoran Zaev was also injured, before that he had manged to reach agreements with three Albanian parties and form a coalition out of 65 MPs, which is enough to elect a new government. While adherents of Nikola Gruevski accused leader of Social Democrats of 'selling the country'. As a result, President of the country Ivanov refused to give Zaev mandate to form government because of his 'standing against integrity of the country'.

The West has already condemned violence in the parliament on 27 April, demanding to carry out investigation and punish those guilty. The Russian Foreign Ministry has supported incumbent Macedonian authorities, condemning opposition for 'the attempt to seize power by force, after initiating election of the Parliament's Chairman with major violation of established procedures'.

Yelena Ponomaryova, historian, publicist, Doctor of Political Sciences, Professor at MGIMO, president of the International Institute for Development of Scientific Cooperation, has commented Pravda.Ru on the issue.

The situation in Macedonia is extremely tense now. I have returned from Belgrade one of these days, where the matter has been discussed. All the Serbian newspapers, as well as Macedonian raise the question of political crisis . The case is about start of a civil opposition and civil war. No one excludes such scenario.

The issue of Macedonian federalization is being considered as almost that already agreed upon. The Albanian part of population can put such issues as the Albanian language and symbols to a referendum. It is an important moment, a crucial one in modern development of the country.

The case is that the so-called Western democracy, which is far from democracy, actively supports interests of the Albanian minority. The Macedonian authorities ask to carry out a census, as figures of residing Albanians are clearly exaggerated to take a certain political decision. The Albanians themselves say about more than 30%. But, given present data, these are about 20%.

The West supports interests of the Albanian minority as Albanians are their main strategic allies in fight against Orthodox peoples, secular states as present-day Macedonia, Serbia, Republika Srpska.

I cannot answer the question why European officials and representatives of the White House have such short thoughts. The process of Albanization though, which is taking place in the Balkans, forms space for destruction more and more. Enterprises do not operate, deindustrialization and archaization of consciousness of political sphere are taking place where Albanians reside. And this zone is being constantly extended. It turns out, that the West supports archaic forces to settle its tasks on annihilation of the Orthodox peoples, main allies of Russia.

What about economy? If more obedient to the West government comes in power, will the Turkish Stream be blocked?

Projects on formation of the Turkish Stream branches may be blocked again, as the South Stream was blocked in Bulgaria under heavy pressure from the Western states. In case Albanians win in Macedonia, problems with the Turkish Stream will occur as well.

Thus, now Albanians demonstrate force. The Albanian flag was set in the parliament first. This step shows they are sure of their victory and support from the West. I would even say that their acts are dictated by the Western support.

Gjorge Ivanov experiences enormous pressure from European officials today. Almost all representatives of the European Commission and other European institutions have already been to Macedonia, held phone talks. They twist Ivanov's arms in the way which is beyond international law and civil community.

What if the President surrenders? Are there forces capable of opposing the Western pressure?

If the President surrenders, a scenario on federalization will be started. It will be offense on the Macedonian part of society. Then the worst scenario may take place: Macedonians and other Orthodox peoples living in the Balkans, who support them, will not agree upon this decision and come into a civil war.

A big lorry has been detained one of these days in Kosovo. It dealt with transfer of armament. One cannot doubt that Kosovo is being armed to the teeth. They already have their own army, quite numerous and effective one, regarding ability of the Albanians to lead a partisan war.

Has Russia to observe?

Serious transformations are taking place in the Balkans. Harsh condemnation of what is going on by Russia, declaration of its stance on support of border inviolability can save the situation, but not for a long time. Roots of the today situation are in collapse of Yugoslavia. To tell you the truth, the moment Yugoslavia was formed, there were a lot of artificial formations, borders did not take into account territories where peoples lived, process of artificial albanization was in place, that is under Tito and after him. And that is a time bomb. The Western politicians actively gather brushwood which is to be set on fire.

Thus, serious escalation should be expected in the Balkans. It may be to distract one from the Syrian crisis or vice versa draw Russia into yet another crisis apart from Ukraine and Syria. As in case it is inflamed in the Balkans, there will be three conflicts, and one can speak of a world war. The Russian historian Andrey Fursov used to say that if more than three serious geopolitical conflicts occur, the case is about a third world war.