ISIL threatens to shed rivers of blood in China

The Islamic State terrorist group (banned in Russia) has stood up against China for the first time in its history, RIA Novosti reports. 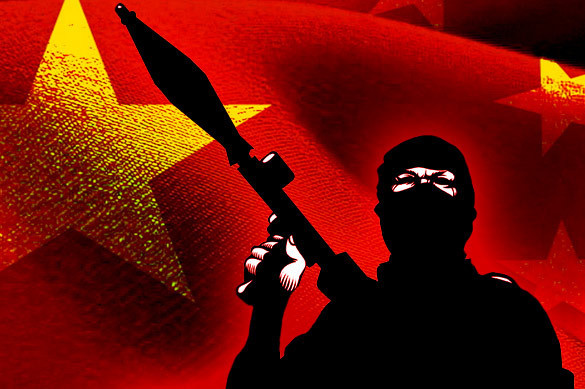 Terrorists of the movement have exposed a video, in which the portrait of Chinese President Xi Jinping "turns" into a flame. The terrorists threaten China and promise to shed "rivers of blood" in the country.

The video also features footage of Uighur Islamists, who prepare to attack China. In their message, the terrorists call themselves "soldiers of the Caliphate." "We will come to you and we will explain in the language of weapons. We will shed rivers of blood to take revenge for the oppressed," the message in the video says.

"China has not been taking any actions in Syria with Russia. Until recently, the Chinese have been trying to stick to their tactic not to interfere as long as possible. Is there any opposition between China and the Islamic State?"

"Islamic terror struck China as early as in the 1990s. In al-Qaeda camps in Xinjiang, Uighur terrorists were training for actions against China. China has not had a clear position as far as the crisis in Syria is concerned. It was formulated only last year. Uighurs from China fight in Syria on the side of the Islamic State too.

"Thus, there is obviously confrontation between China and Islamic terror, although it has not received a lot of international attention. Now China has taken a clear position on the Assad regime and support for Russia's actions in Syria. US President Trump also played an additional role here as he has declared USA's opposition to China. ISIL terrorists apparently thought that it was a good moment to announce their support for Islamic Uighur terrorists."

"How can China change its policy after the threats have been announced?"

This enables the Chinese government to more openly support all actions against the terrorist organizations. China can take a more active stance on its support for Russia. Obviously, China's struggle against ISIL will continue growing."