Falcon 50 light aircraft crashed into a snow removing vehicle at Moscow's Vnukovo Airport. The plane burnt completely during the crash, killing all four people on board. President of French oil company Total,  Christophe de Margerie, was among those, who was killed in the crash, TASS reports. Three crew members, also French citizens, died too. Official spokespeople for Total confirmed the death of the company president. 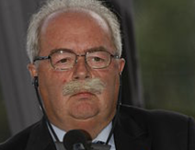 The plane was flying from Moscow to Paris and had a French registration. Representatives of the Investigative Committee said at first that there were five victims of the crash, including the driver of the snow-clearing vehicle. Afterwards, the information about the death of the driver was denied.

The crash took place at about 23:57 Moscow time.

"According to specified information, four people have been killed in the crash: three crew members and a passenger of Falcon aircraft, owned by a French airline," representative of the Investigative Committee, Tatyana Morozova said. According to her, a 39-year-old woman and three men are among the dead - all French citizens.

The plane burned completely, it was impossible to save anyone from the plane, even though emergency services immediately began to extinguish the fire, the press service of the Vnukovo Airport said.

A criminal case was filed under article 263 of the Criminal Code of the Russian Federation - "Violation of safety rules and operation of air transport, resulting in the death of two or more persons".

"Black boxes" of the aircraft have been recovered from the crash site, officials said. The flight recorders were said to be "in a normal condition."

The aircraft, according to witnesses, did not manage to take off from the ground. The plane collided with a snow-removing vehicle, and the aircraft burst into flames at once, although there was no explosion. The driver of the vehicle is alive. The man did not even suffer serious injuries, but he remains in a state of shock.

France was informed about the tragedy at Vnukovo. Paris will send its experts to Moscow within the shortest amount of time.

According to RIA Novosti, the nose gear of the plane touched the snow-removing vehicle, and the plane flipped over. The 60-year-old driver of the vehicle was sent for medical examination.

In the evening of October 20, heavy fog changed the work schedule of Moscow airports. As many as 12 planes heading to Vnukovo Airport, landed at Domodedovo instead because of the fog.

During the recent months, Christophe de Margerie, Total CEO, was lobbying the delivery of French helicopter carriers Mistral to Russia.

In June of this year, Christophe de Margerie gave an interview to RBC, in which he said that Total did not panic about the restrictions imposed by the United States against Total's partner, Gennady Timchenko. He also said that Total was not going to close its business in Russia.

Commenting on the situation after the imposition of sanctions against Russia, Christophe de Margerie said that the partnership between Total and Novatek had not suffered any changes. "The same situation is with Lukoil, Gazprom, Zarubezhneft and Rosneft.

In September, The Financial Times reported that Total had suspended cooperation with Lukoil in Western Siberia. After Timchenko was included on the list of sanctioned individuals, Christophe de Margerie called him his friend.

French company Total, along with Royal Dutch Shell, BP and ExxonMobil, is one of the world's largest oil and gas companies. It was founded in 1924; the name Total appeared in 1985.

Christophe de Margerie was affectionately known as Big Mustache. He was known for being opposed to international sanctions and embargoes. He became Total CEO in 2007, whereas he started his career at the oil company in 1974. Christophe de Margerie was a regular participant at annual meetings of the council for issues of foreign investment in the Russian Federation. A regular meeting of the council was held on Monday, October 20th. According to the Kommersant newspaper, the meeting was attended by Prime Minister Dmitry Medvedev, First Deputy Prime Minister Igor Shuvalov, Deputy Prime Minister Arkady Dvorkovich, and the heads of relevant ministries and agencies.

Total has been working on the Russian market since 1989. The company operates one of three projects in Russia. In 2008, Total became the first partner of Gazprom in the development of the first phase of the giant Shtokman gas condensate field (Barents Sea) with the share of 25 percent as a technological and financial partner.