Hasan Rohani: West must assume its guilt in the emergence of terrorism

"Military aggression against Afghanistan and Iraq and undue interference in the development of Syria are clear examples of this misguided strategic focus on the Middle East," Rohani said in his speech at the 69th General Assembly of the United Nations in New York, USA . (UN) 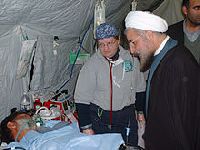 The president of the Islamic Republic of Iran, Hasan Rohani, said that "the strategic mistakes of the West in the Middle East, Central Asia and the Caucasus have turned this part of the world into a haven for terrorists and extremists."

Moreover, the Persian leader returned to denounce the violence in the Middle East, which "is now generalized to other parts of the world like a contagious disease," becoming a global problem.

The Iranian president also stressed that the phobia against the Middle East is the result of hegemony and racism, adding that if there are no efforts to confront extremism and violence "tomorrow the world will not be safe for anyone."

Pointing out that extremist groups were created by countries that cannot stop them now, Rohani said that "the repetition of these errors is intriguing."

Furthermore, criticizing the presence of terrorists in different countries of the region, whose only ideology is extremism, the Iranian president said they seek to eliminate civilization, to promote Islamophobia and prepare the ground to facilitate the participation of foreigners in the region.

According Rohani, all who have played a role in creating and strengthening these terrorist groups should admit their mistakes and apologize for the past and for the future.

The modus operandi of the Western nations is one of intrusion, skulduggery and deployment, preparing the ground to use groups who act by whatever means to foster the interests of the groups which control the policies of Washington and its NATO Poodles. At the end of the road is always the same thing: energy, weapons contracts or geostrategic positioning. These days the West is quite brazen about its aims and seems not to care any more about cloaking what its intentions are. It has Governments overthrown, it aids and abets acts of terrorism by terrorist groups, it invades, it circumvents the United Nations Security Council if needs be, it breaks every law in the book, it commits war crimes...

Nevertheless, its sheer arrogance can only have one end, and that is the same as the motorcycle rider who takes one risk too many on the wrong day.

This Western policy will sooner or later slam into a tree.