Reconstruction of Gaza can cost up to $ 12 billion

The Gaza Strip needs at least four billion dollars for the reconstruction of the region, after having been destroyed during the recent military assault of Tel Aviv. However, this number could rise to $ 12 billion, said an official of the UN, on Wednesday September 3."An extremely conservative estimate is four billion, but this figure can reach, silently, 2 billion dollars. 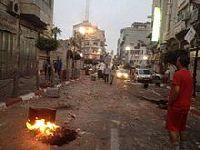 "The worst part of this process is that the reconstruction of the entire infrastructure of Gaza may take about ten years to be completed," says Mahmud Elkhafif, coordinator of assistance to the Palestinian people of the United Nations. Elkhafif also said that the latest Israeli offensive happened at the moment when only 40% of the Gaza Strip had been rebuilt.

The region was still trying to rebuild after the damage caused by the Israeli attacks carried out between 2008 and 2009. The UN official said the situation in the Palestinian territories, particularly in Gaza, is a constant "murder of an economy" that every time you try to recover it, it goes back to being devastated.

He added that part of the West Bank, which corresponds to 62% of its total territory is rich in natural resources, but the Israeli regime prevents Palestinians from using their own natural resources and builds houses on their own land. On August 28, Israeli soldiers destroyed several houses in the city of Al-Quds (Jerusalem), without allowing its residents to go and gather their belongings.

The last offensive of the Tel Aviv regime against Gaza claimed the lives of at least 2,159 Palestinians, mostly civilians, including women and over 500 children. Homes, schools and hospitals were destroyed.