Justice: A Time for Revenge

Would you sit still if you saw women and children murdered every day? Murdered by a government that calls you a terrorist and blames another country for the murders they themselves commit. Your own government has been taken over by a greedy and tyrannical empire. They claim to help you but they bomb you and your people to extinction. They smile while blaming Russia and ignore genocide. Death is your fate. Will you accept it? The Ukrainians in the southeast say no. 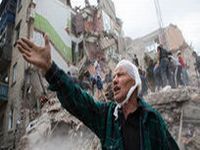 Once the US fought for freedom and against the Nazis but now they support them. I can imagine what General Patton would say were he alive, "What the Hell happened to my country?!" I am sure he would say worse and seek out every traitor in the White House. The world has turned upside down. America, the once "Land of the Free", will not come to the aid of the people of Donbass. Lady Liberty turns her back on the tired, poor and huddled masses yearning to breathe free. Therefore, her freedoms will slowly be lost.

The Motherland helps only a little with food, supplies and medical aid. The people of Novorossia will not see celebrations as there were in Crimea when they voted to be a part of Russia. They have no Russian naval port or anything worth saving by President Vladimir Putin. These people feel betrayed by Russia. They voted for independence like Crimea but they were not accepted as Crimea was. They thought they would be protected like Crimea but they were wrong. They never imagined such horrors at their doorstep.  President Putin hopes for economic prosperity with the West at the cost of Donbass lives. Therefore, his compromise will grant little success.

Hundreds of thousands of refugees stream into Russia. Men drive their families to the border then go back to fight for their homeland. They have no air force and they are outnumbered. They are led by Igor Strelcov and are fighting for survival. A soldier from Donetsk says, "I am not afraid of you". They are tired of being afraid and will make a stand. He addresses the Kiev army, "I will personally hunt you down..."

The bombing of Gorlovka recently was typical of the army from Kiev,USA. Attacking only civilians as ordered by Poroshenko and advised by the CIA. July 27th was another tragic day.  Horrors typical of US diplomacy. Tortures and bodies torn to pieces as in other cities. They seem to attack women mostly. They do not attack the military only civilians in Gorlovka. Even nursing homes are not off limits. Centuries ago the Mongols came from the East now they come from the West supported by billions of US tax dollars.

If you would like to protect the innocent please see this video and volunteer or send what help you can.

The following is from the video "Oath of Ukrainian":