For 10 years the political right, with its allies abroad, has supported the transfer of Colombian paramilitaries for its violent plan against Venezuela. This is an act of intrusion, of sedition and terrorism against a constitutional, democratically elected Government. The west, once again, says one thing and does another. 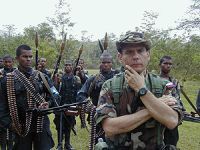 Since 2004, the Venezuelan right, with support from its allies abroad, has included the use of Colombian paramilitaries as a key part of the plan of sedition against Venezuelan democracy and constitutional government. Last May 9 completed a decade since the capture of 153 Colombian paramilitaries hired to assassinate the leader of the Bolivarian Revolution, Hugo Chavez, and bring chaos to Caracas and the rest of the country.

The information gathered by the Venezuelan intelligence detailing the operation to thwart that attempt was made in the early hours of Sunday, Mother's Day, when employees of the defunct Directorate of Police Intelligence (DISIP), currently Bolivarian National Intelligence Service (Sebin) and the Directorate of Military Intelligence (DIM) entered Daktari farm, located in El Hatillo municipality in the state of Miranda, near Caracas, owned by businessman Robert Alonso, who is currently a fugitive from Venezuelan justice and lives in Miami, United States, from where he conspires against Venezuela.

Venezuelan intelligence agencies found that the paramilitaries had planned to assassinate Chavez during a dinner with bankers in Casona (presidential residence), while other irregular units would assail the Miraflores Palace and others would go to the armory located at the National Regional Guard Command # 5 and air base of La Carlota. An aviation official seized an aircraft to bomb the headquarters of government.

The property owner, Alonso, joined the "Plan Guarimba" and the rightist coalition "Democratic Coordination" (the main promoter of the coup executed in April 2002), the predecessor of the current opposition coalition, called the Bureau of Democratic Unity (MUD).The business is now known as "Greater Guarimbero" and received help from Miami's violent groups calling for the overthrow of President Nicolas Maduro and performing terrorist acts that have left, since February this year, 41 people killed - and hundreds wounded among the wreckage in public and private institutions - including arson attacks and murders carried out by snipers, in the continuing plan to end the Bolivarian Revolution, which 15 years ago implemented social policies of fair redistribution of wealth in the country, which has on its soil the largest oil reserves on the planet.

Pedro Carmona Estanga, the coup leader who usurped power in Miraflores during the coup of 2002; former Secretary General of Democratic Action (AD), Rafael Marín; the entrepreneur Gustavo Zigg Machado; the then First Deputy of Justice (PJ) Liliana Hernández and the military coup member Jael Contreras Rangel were linked to the assassination of some persons, identified by Venezuelan authorities as a result of subsequent investigations and confessions of paramilitaries.

"Killing with a foreign Knife"

In 2006, the direct involvement of former Colombian President Alvaro Uribe was confirmed in the paramilitary invasion of the State of Miranda. The statements of the former director of the Computer Administrative Department of Security (DAS) Rafael García thus confirmed.

"Yes , there was a destabilization plan against the Venezuelan government and many people committed in the Colombian government," said Garcia in a statement to Colombia Week Magazine, about which he also expressed that "the plan contemplated the murder of several leaders of that country (Venezuela)."

In this context, last May 02, the Minister of the Interior, Justice and Peace Affairs, Miguel Rodríguez Torres, reiterated that in the current terrorist actions against Venezuela, Uribe is also deeply rooted. "Seeing that the hand of Álvaro Uribe is behind these plans ( ... ) gives us chills. He's the master of false positives, an expert in what they call there 'Killing with a foreign knife' ", stated the Minister.