US in Syria: A donkey with two bags of gold will win any war

The intensity of the war in Syria goes up and down. The struggle for influence in the Arab world has resumed between Russia and the U.S, and the Syrian conflict has become a defining moment in many ways. When will the conflict be resolved? Araik Stepanian, the executive secretary of the Academy of Geopolitical Issues talked about this in a live broadcast of Pravda.Ru. 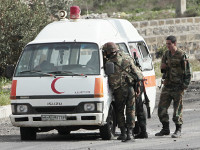 "I would like to begin our conversation with a discussion of impunity and monstrous crimes of the so-called Syrian rebels. I heard that even during the peace talks in Switzerland they beat up journalists. What is this all about?"

"The opposition is convinced that they can do anything, and the media should represent only the views of the representatives of the opposition. The rebels believe that the U.S. and the West have their back, and they are allowed to do absolutely everything. The same could be observed in Ukraine.  In Syria, the West allows the opposition everything, including murders in the cruelest ways, lynching, shootings, bullying ... They are forgiven everything and get away with everything. There is no question of convening any tribunal, the Hague or the UN. No one talks about punishment. It is allegedly a war that has its own logic ... Before, when people committed war crimes, they tried to do it discreetly.

"The modern psychology of war, on the contrary, urges to make video recordings of brutality, show them to the world to intimidate the enemy and for the sake of showing off. This clearly demonstrates that they are not afraid of any punishment; they do not care of all these international courts and other hypothetical measures of condemnation and punishment. The worst thing is that the "civilized" West that always stands up for democracy, freedom of speech, humanism and human values, is silent. No one intends to apply any sanctions to these obvious criminals.

"But if a government supporter does anything at all, for example, hits an armed opposition representative with a baton, then they immediately start screaming that this is a crime and the government is criminal because it encourages and orders to beat the opposition. They begin imposing sanctions against that person and the entire government."

"  Why, in your opinion, this is happening in the Mediterranean? Is this someone's thoughtful geopolitical strategy, a multi-step game? Why did it begin in Tunisia, Egypt, and Libya? There are protests even in Europe, for example, in Greece, Spain and Italy.  "

"Therefore, the Anglo-Saxons had to implement this doctrine since antiquity, regardless of the regime, the English Prime Minister or the American president. The first thing they need now is control over this resource-rich region to push Russia out, to weaken Russia's influence. Hence, the second doctrine, to weaken Russia itself.

"A classic of marine strategies and geopolitics in general, U.S. Admiral Mahan demanded precisely that. He attached great importance to the space factor, and in the late nineteenth century he postulated that the Russians should be ousted to the latitude 35-40 north, where they will die due to the climatic conditions. They are implementing this policy, this program. The entire history of the last century went through the axis of the heartland, and by the beginning of the third millennium they have come close to the final phase of the project.

"Before, they used to seize countries with their armed forces, and then developed a successful system and technologies to achieve the desired objectives through proxy. They began arming the opposition and raising it to fight and overthrow the legitimate government. All they had to do is control the country through these subordinate forces. This method, in principle, is not new. In the ancient Roman version, legionnaires stayed in an occupied country and controlled this territory. Then Lawrence of Arabia proposed a new version. He improved the first stage, seizure of power by the people. He put forward his thesis: "We must make the Arabs fight the Arabs for British interests."

"The Americans began to use this technology to avoid wasting the blood of their soldiers. When they do send their armed forces, as it happened in Iraq or Afghanistan, the Americans, even fighting with poorly armed men, often bribe generals. This is also not new, this method has been known since the time of Alexander the Great."

"A donkey with two bags of gold will win any war.  "

"Yes, it is their system. The technology works. So they invaded Iraq, Afghanistan, overthrew Muammar Gaddafi. They tried in Egypt, Algeria, Tunisia, but in these countries, for various reasons, it did not work out so well. They tried Syria and misfired."

"  Given the geopolitical nature of many conflicts, is it possible that tensions may be felt in other countries of the Black Sea and Mediterranean basins?

"Yes. After all, all these military conflicts began unexpectedly. The Caspian, Black and Mediterranean seas are the three main points where the Americans are playing their geopolitical game. They very much want to take them under control. There are great resources in these areas, communication, both land and sea, marine units, the Bosphorus, the Dardanelles. They need it to block Russia's entry to the southern seas. The Americans will fight fiercely for the region."

"  You keep talking about the Americans. Is there a difference in the position between the United States and the united Europe?"

"Europe is not an independent player. Yes, they are united. But they did not become independent, they are under strict control and domination of the United States. European countries were taken without any war long time ago and are being manipulated. The EU mechanisms allow them to do it much easier.

"  Let's go back to the local Syrian conflict. When, in your opinion, this war will end?  "

I think that the Syrian people are already tired of war. This means that soon they will say goodbye to foreign mercenaries. In Syria, there will be peace without the United States, without external interference. We will help Syria to rebuild.

"  Does this means that there is no need for Geneva?"

"No, there is a need, at least for contacts. Hopefully, Russia, Iran, and Saudi Arabia together can help a diplomatic settlement.

"  Elections in Syria are scheduled for this year. Will they take place? Who will win?  "

"I think that the elections will take place and Bashar Assad will clearly win. He enjoys support of the people. This will be a vivid demonstration of true democracy and free expression of the people. And the Americans and the West will have to reckon with it."