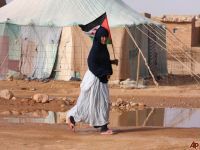 On Saturday, 8 March, in the occupied city of El Aaiún, Saharawi women attempted to express their solidarity with women around the world and their rejection of the occupation of Western Sahara during a peaceful demonstration in the occupied city of El Aaiún. The Moroccan police has surrounded the place provided for the event, 50 Saharawi were able to pass, while 200 protesters were turned away. The call to protest was launched to 5:00 p.m.

The Moroccan police violently dispersed the protesters gathered in Smara Avenue, leaving the group only a few minutes to express their protest. Saharawi journalists, who were informed of this event, took place at strategic locations well before the announced time of the event, in order to make footage of the claims.

At 4:00 p.m., Lafkir Laghdaf from Media Team, Khaled Rouhi, a photographer from Information Group Western Sahara, and a third photographer whose name has not been disclosed, were arrested on the roof of a building in Smara Avenue. The Moroccan police seemed to be well informed. The three Saharawi journalists were transported on a police car to the prefecture; after seven hours there is still no information on their fate.

This arrest of the three Saharawi journalists follows the arrest a few weeks ago of four other Saharawi journalists from the same information team at a police checkpoint in Sidi Ifni in the south of Morocco. Those have been convicted quickly in the first instance to prison sentences from four to six months imprisonment.

The visit of a judicial police agent from Salé station (north of Rabat) to the Saharawi political prisoner Mohamed Tahlil, arrested with the group of "Akdeim Izik", points out to the same framework of attempting to prevent the work of witnesses and journalists on what is happening in the occupied territories of Western Sahara.

The Salé´s police agent is investigating the charges against Mohamed Tahlil, who has been indicted untruthfully of attacking five police officers in the occupied city of El Aaiún in 2010. According to Mohamed Tahlil, the questions made sought to also incriminate the Saharawi human rights activist Hassanna Duihi in the same case.