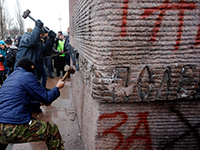 Any political unrest has a number of side effects, including of "cultural significance." Rioters destroy monuments and damage works of art. During the riots in Kiev, a part of collections of the Museum of History was destroyed.

The collection of the Museum of History of Kiev, which was founded in 1978, consists of exhibits of the Institute of Archaeology of the Academy of Sciences of the Ukrainian Soviet Socialist Republic. Private collectors, as well as companies donated many rarities to the museum. The collection includes a total of 250,000 exhibits.

Originally, the collection was located at "The House of Peter I." In 2004, the museum was moved to the fourth and fifth floors of The Ukrainian House.

On February 18 overnight, vandals broke into the building and stole a number of exhibits.

Employees of the museum tried to hold an inventory afterwards, but they failed to make the full list of missing artifacts. According to preliminary estimates, the looters stole the sculpture of Empress Catherine II, who, by the way, made the Crimea a part of Russia. XVIII century china went missing as well. Some of the exhibits, representing a considerable historical value, were simply destroyed. Museum employees found pieces of an astronomical instrument dating from 1825, and shards of a porcelain statue of a boy made by Miklashevsky Factory in the early XIX century.

This precious porcelain was produced only from 1839 to 1862. Products of the factory were peculiar for their design - magnificent vases, dishes, glasses and decorations. The most famous of them is a figurine of Joan of Arc, vases, adorned with imitations of gemstones - porcelain cabochons - and rare inkwells decorated with curly cartoons on French writers Charles Nodier, Armand Marrast and Charles-Paul de Kock. The products of the Miklashevsky Factory enjoyed demand on the entire territory of the Russian Empire and became collectible in the middle of the XIX century. These products were also present in the vaults of the Natural History Museum. Now some of them have been permanently lost.

As for historical values, antique porcelain is hardest to preserve. Its price is so high that many collectors prefer to buy rarities in the European countries that did not know any revolutions in their history. It is difficult to even imagine the cost of the museum porcelain that was so thoughtlessly destroyed by the looters in Kiev.

The vandals also broke into archaeological funds. However, they were more interested in computers in the accounting office. War makes some people rich, as they say. The impression is that the riots played into the hands of representatives of criminal circles. Most likely, the thieves were hoping that all will be ascribed to Maidan.

Marcus Tullius Cicero once said: "When weapons thunder, laws are silent." Later this statement was paraphrased as follows: "When guns thunder, muses are silent." When they count the wounded in the streets of Kiev, it seems that the destruction of a museum does not mean anything. But those who dare to destroy spiritual values​​, hardly ever realize the value of life.

It is difficult and sometimes impossible to recover or restore destroyed or lost exhibits. Many generations of Ukrainians and Russians were collecting exhibits for centuries. All of them were greater patriots than those thugs who use the riots to cover up their crimes.