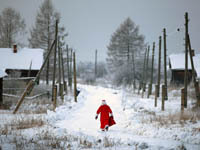 The police of the Republic of Yakutia investigate the murder of a participant of a corporate New Year party. The victim, dressed as Santa Claus, or Ded Moroz, (Grandfather Frost) was found bound and gagged. According to preliminary reports, the man was killed by his live-in girlfriend and other members of the party, when the "good wizard" fell into a fit of aggression and grabbed a knife.

The corpse of the 42-year-old man was found on Sunday evening in the diner on Kurashov Street in the city of Yakutsk.

It has been established that there was a party held in the diner on December 22 to celebrate New Year holidays. The party was arranged for the personnel of the diner.

After most of the guests went home, a conflict sparked between the worker, who was dressed as Santa Claus, and other partiers. During the fight, the man grabbed a knife and began to threaten opponents with murder.

"To calm the man down, other people in the room knocked him down and tied his hands and feet with a rope. The man was screaming loudly, so his girlfriend tied his mouth with a scarf," a police officer said.

Having left Santa Claus in the vestibule of the dining room, the woman went to see the guests out. When she returned to her civilian husband, she found him already dead.

To establish the cause of death of the brawler, the body was sent to forensic examination. A criminal case has not been filed yet. Most likely, the man died from choking on his own vomit.

Two years ago, the police of the Moscow region were investigating the murder of another "Santa Claus" in the town of Orekhovo-Zuyevo, near Moscow. The party ended with a fight and the stabbing of 29-year-old man named as Dmitry Zaitsev, who played the role of Santa Claus. It was said that the young man was jealous of his wife, the Snow Maiden (Snegurochka), whom she suspected of having an affair with another man.

In 2011, in Dushanbe, Tajikistan, hooligans stabbed a 24-year young man, who was also dressed as Santa Claus. The man received four stab wounds in his leg and stomach, as he was going to congratulate his relatives. The man died from severe blood loss.

The victim held dual citizenship of Russia and Tajikistan. However, representatives of the Russian Embassy in Dushanbe did not visit any of the court hearings on the case of his murder. The attackers were sentenced to ten and four years in prison.

Eyewitnesses said that the fight could be based on national strife, as the attackers were shouting insults. The Muslim men, who attacked and killed the man, may have not liked the fact that the Russian-Tajik man was celebrating New Year on Christian traditions.