The leader of Al-Nusra Front, Mohamed Abu al-Yulani, does not rule out that Saudi Arabia would become the next target of al-Qaeda in the region. In an interview with Qatari Al- Jazeera Channel, Al-Yulani said that if Syrian President Bashar al-Assad will stay in power, "then the next target will be the Arabian Peninsula, known as Saudi Arabia." 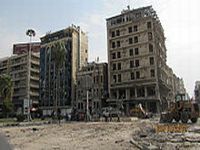 The leader of al-Nusra, a subsidiary of Al-Qaeda in Syria, said it will target the eastern part of Saudi Arabia, where we find most of the oil in the country. During his first interview with the media, he appeared back to camera; Al-Yulani also warned about the possible improvement of relations between Iran and the United States by the recent nuclear agreement reached in Switzerland, since, in his opinion, it reinforces the position of the Persian country in the region.

Furthermore, he explained that his group rejects any results arising from the second edition of the peace conference on Syria known as Geneva II, which will take place on January 22, 2014 in the Swiss town of Montreux.

In future Al-Nusra could become the number one enemy of Saudi Arabia, despite the head of the intelligence services in the country, Prince Bandar bin Sultan, being the main sponsor of the terrorist cell, according to recent information released by French bulletin "Intelligence Online", specializing in Strategic Affairs.