The news that Angola became the world's first country to ban Islam emerged in all news agencies of the world. The number of shutdown mosques has reached 60, leaving only two operational mosques. This way the Angolan authorities are trying to protect the country from the Islamist threat and prevent the situation similar to those in the neighboring countries.

With the closure of the mosque in the city of Huambo the number of shutdown mosques in Angola rose to sixty, reported Angolan newspaper O Pais. According to the newspaper, there were only two operational mosques left, in the capital city of Luanda and Benguela.

The newspaper interviewed a famous Muslim activist David Alberto Já who complained that the authorities did not even warn about their actions.

"Unfortunately, it has become common practice for the authorities. They do not notify the leaders of mosques, just send the police, come to the place and announce the closure, without explaining anything," complained the activist representing the Islamic community of Angola (COIA). David cannot understand the reasons that could lead to such drastic measures. "I am the leader of the Muslim community, and I've never received any notifications from the Ministry of Culture or the Ministry of Justice that, I believe, are the relevant authorities."

Angolan Culture Minister Rosa Cruz e Silva explained the government's position to Moroccan newspaper La Nouvelle Tribune. "The process of legalization of Islam has not been approved by the Ministry of Justice of Angola, and, consequently, the mosques across the country will be shut down upon notice," the newspaper quoted the Minister of Culture. Luanda governor spoke in a similar vein, and talked about the threat of radicalization of Islam in the country and that the government is not ready to legalize this threat in the mosques. 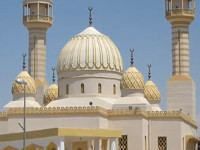 David Já believes that the closure of mosques across the country is a violation of the Constitution of the Republic of Angola that enshrines the practice of religion if it does not violate public order and is performed in the designated facilities. "That's what we did. We were quiet, did not sing our sunnah loud, did not play musical instruments, we do not understand what we are in violation of," said David Albert Ja. He said that Islam was practiced by over 800,000 believers in the country, which is about 23 percent of Angolans."

The likely reason for the behavior of the Government of Angola is the fact that the number of Muslims in the country is increasing exponentially. In 2004, the newspapers wrote about 15 thousands of believers and in two years the number of mosques has increased to eight. Now, 9 years later, the figures are 800,000 and 60, respectively. Another factor is the advancement of jihadists to the West of the continent. Islamists have already captured and destabilized Maghreb, Somalia, Mali, Senegal, Niger, Sudan, and came close to the Angolan border. In addition, the Angolans are looking at the Portuguese-speaking Mozambique, where Muslims are numerous and where recently there was an attempt to plunge the country into a civil war.

Unemployed Muslims from all over Africa are running to thriving Angola, and in practice, the mosques recruit into extremist Wahhabi sect. In a rich country like Angola jihadists have a lot to fight for. Macroeconomic indicators are impressive. According to the report of the IMF - World Economic Outlook, in 2011, GDP growth amounted to 10.5 percent. In 2012 it was 6, 8 percent. This growth is provided by the resource sector - oil, diamonds, and iron ore, booming construction industry, telecommunications and energy. According to the forecast of the World Bank, in 2016 Angola will overtake South Africa's economic potential.

After setting peace in 2001 following forty years of a bloody civil war, the government and President Eduardo Dos Santos do not want to plunge the country into a new war. "Angola is not Egypt. Angola is not Libya. Angola is not Tunisia," said the secretary of the MPLA from Luanda Bento Bento, implying that the government will act firmly against any extremist threat.

"We are not a sect. We present a monotheistic religion, we are monotheists just like Christians, Jews, I repeat, we are not a sect, but a religion that has existed since time immemorial," said the Angolan Muslim leader. And he is also right.

"Angolans are looking at the situation with their neighbors, and, of course, they are concerned about the threat of Islamist. The country is booming and attracting foreign investment, there is a stable political system, a large number of minerals, so Angolans are trying to protect themselves. There are huge immigration flows, including from Arab countries, hence these measures. As for the fact whether these measures are adequate, I would not support them. One cannot ban people from practice their faith, it can lead to very negative consequences," told Pravda.Ru Alexander Arkhangelsky, senior research Fellow at the Center of the Southern African Institute of African Studies.