It was all in a day's work: Courts and the MKs working to legislate and implement policies of destruction and concentration of Bedouin villages... 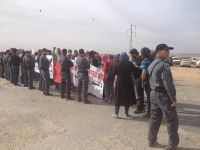 The judge ruled that Sheikh Sayah, the leader of the village of El Araqib, should pay 10,000 nis bail and must stay at least 2 kms away from his home. And what did Sheikh Sayah do to deserve this punishment? Nothing. Well he did - he is resisting the government's wish to destroy his village.

So Sheikh Sayah is arrested for trespassing on Governement land - meaing on his own village lands. However there is no law against this. Now it is time for the judicial system to help. So after his umpteen arrest a judge rules that Sheikh Sayah can be released from prision on condition that he never re-build his home. Sheikh Sayah is not a young man, and accepts that he must be dependent on other's good will to allow him to utilize their homes in the village. This was about a month ago. However, five policement submitted statements that they saw Sheikh Sayah supplying the builiding materials and re-building his home in El Araqib. it is only their word, as they for some reason did not have the ability to photograph him in his actions...

And again the courts participate in the government's wish to break the resistence of the Bedouin to the destruction of their villages. The judge ruled today that until the case is completed in court Sheikh Sayah won't be able to go home. Sheikh Sayah refused to the conditions of his release and is still under arrest. Tomorrow he will be brought once more to court at 11:00.

The Committee of Internal Affairs of the Knesset was taken on a tour in the Negev to see the possibilities of implementation of the Prawer Law. And who was NOT allowed to participate? The Bedouin...

In protest the leadership of the Bedouin in the Negev organized a general strike in the Bedouin community in the Negev. In addition we stood in protest in the entrance to the towns and villages that the committee was planned to visit. In Rahat, the committee's first stop, the police's special forces attacked two peacful protestors and hit them violently, throwing them to the road, causing injury, and then arrested them. All to allow the visit, lead by the Authority for the (un)Settlement of the Bedouin, headed by Yehuda Bahar, pass through without having to view the protest.

Then we learnt that the committee left the village via a side dirt path. So as not to pass by the protest. Now we know - we are not legitimate protestors, but rather a vicious and dangerous enemy. Now we know that in order to visit the Negev the committee had to be escorted by a fleet of police cars and trucks, and it had to avoid the dangerous protestors (we were armed with a loudspeaker!).

And I ask myself - what are the chances that the Committee of Internal Affairs will really listen to these people that they view as the enemy, in the process of deliberating the plans for the future of these people??