In Warsaw, members of the March of Independence, which is traditionally arranged by representatives of nationalist organizations to mark Independence Day in Poland, attacked the embassy of the Russian Federation. Hooligans threw flares, bottles and firecrackers on the territory of the Russian Embassy. 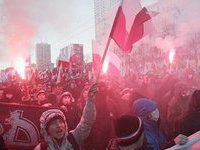 The attackers set on fire a guard booth and a parked car nearby; some tried to climb the fence of the embassy. An arch of flowers, made in colors of the rainbow to symbolize tolerance, was set ablaze as well.

The territory of the Russian embassy in Warsaw was not damaged in the attack. The route of the march went from the back of the diplomatic mission, made a U-turn and continued along the main entrance to the monument to the Polish politician of the early 20th  century Roman Dmowski.

Riot police used water cannon against the marchers. Due to the failure to follow the rules of law and order, the municipality of Warsaw decided to terminate the action, which attracted tens of thousands of people.

Organizers of the March of Independence promised that this year's event would take place quietly. However, fights and clashes with police occurred an hour after the start of the procession. Several people were injured, including police officers and reportedly journalists.

Some time later, the police took control of the situation and arrested several hooligans near the embassy. However, the attackers did not leave their intentions and decided to attack the embassy from the other side. The police had to use tear gas against the raging crowd.

According to unconfirmed information, riot police officers fired rubber bullets at the attackers. There were wounded people among the protesters, local media said.

The attackers failed to penetrate into the territory of the embassy. A total of 32 people were arrested.

Polish Prime Minister Donald Tusk said that the unrest on the Polish Independence Day stained the country's reputation. He promised to cut his visit to France to personally investigate the report on the events of November 11.

Meanwhile in Moscow, police units were deployed in the vicinity of the Polish embassy in the Russian capital after the riots in Warsaw.

Noteworthy, the security level at the Russian diplomatic mission in Poland left much to be desired in the past as well. Back in August 2005, hooligans brutally beat three children of Russian diplomats. When the Russian-speaking young people aged 16-17 years (all of them attended the school at the Russian Embassy in Poland) were going back from a movie theater, they were attacked by a group of Poles (about 15 people). The latter shouted anti-Russian slogans and obscene offensive words. The Russian embassy in Warsaw handed a note to the Polish Foreign Ministry in connection with the beating of the children of Russian diplomats. The Polish Foreign Ministry expressed regrets about the incident.

Several days later, an incident took place in Moscow in response to the beating of the Russian teenagers in Poland. In front of the Polish Embassy in Moscow, an officer of the Polish diplomatic mission, Andrzej Uryadko, was beaten and suffered a concussion. Three days later, another attack occurred: second secretary of the Embassy of Poland Marek Reshuta was beaten as well.

Experts say that the Russian-Polish relations began to worsen in late 2004, immediately after the victory of the "orange revolution " in Ukraine. Then-President of Poland, Aleksander Kwasniewski, refused to recognize the victory of Viktor Yanukovych and became a mediator in the talks between the government and the opposition, during which the third round of voting was appointed. Thus, the Polish president beat his Russian counterpart Vladimir Putin and managed to mobilize the West in support of Viktor Yushchenko.

On December 18, 2004, President Kwasniewski said in an interview that "Russia without Ukraine was a better solution than Russia with Ukraine." In response, on December 23, 2004, Vladimir Putin said at a press conference said the statement from Kwasniewski sounded like the words of a man, who was looking for a job before his term was going to expire. Putin alluded to the rumors saying that Kwasniewski could take a high position in the EU or NATO after his resignation.

On March 21, 2005, the Russian Foreign Ministry condemned the move to rename a square in Warsaw in honor of late Chechen terrorist leader Dzhokhar Dudayev. Moscow City Duma deputies in response proposed to name the street on which the Polish Embassy is located in Moscow, after Count Mikhail Muravyov, who suppressed the Polish uprising of 1863-1864.

On May 5, 2005 the Polish Parliament demanded the Russian Federation should condemn Joseph Stalin for signing of the Molotov-Ribbentrop Pact. In response, Moscow invited to the May 9 celebrations not only President Kwasniewski, but also the last leader of the Communist Poland, Wojciech Jaruzelski. On May 8, the President of Poland asked for an apology from the Russian authorities for the shooting of Poles in Katyn. No reaction followed.

On 11 May 2005, Vladimir Putin refused to head the Russian delegation to the Summit of the Council of Europe in Warsaw, scheduled for May 16-17.

Sergei Fyodorov, a leading expert with the Center for Social Research of the Institute of Europe of the Russian Academy of Sciences, told Pravda.Ru:

"Anti-Russian sentiments in Poland are strong. They are based on our complicated history of relations with Poland, beginning with the Polish-Lithuanian invasion that we still recall. In general, such incidents in our history are plentiful. The tragic events in Katyn still remain a bone of contention. We apologized, but the Poles still make a big deal out of it. This virus of hatred exists not only in Poland, but in other countries as well. In Ukraine, for example, it's the same. This is normal, we shouldn't believe that Russians should be loved everywhere. I am certain that there are many reasonable people in Poland, who understand that Poland should not ruin its ties with Russia. It is nationalism that should be curbed because it never leads to anything positive."