Doctors used as Fifth Column of the West in Syria

The information war against Syria continues. Every day, "well-wishers" sound the alarm about the dire humanitarian crisis in the country. They work for the new goal - to ensure the fastest departure of legitimate President Bashar al-Assad. Propaganda tricks are so obvious that they are disgusting, but their objective is quite clear. 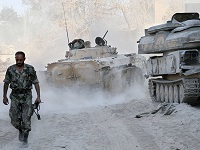 On Monday, the UN Humanitarian Coordinator Valerie Amos has announced that approximately 9.3 million people in Syria, or 40 percent of the population, were in dire need of help. The official has emphasized the scale of the disaster by adding that this number was at 6.8 million In September. Valerie would not make a mistake if she called all 23 million of Syrian citizens "people in need," stressing that Assad and those close to him were getting fat on the humanitarian aid. Perhaps Ms. Amos is not gutsy enough.

But there are plenty of other gutsy ones, and often they are people of respected profession - doctors, one of the few who by the nature of their work are able to legally travel to any hot spot on the globe. For example, the Israeli media on October 26 published a call of their doctors to the international community to draw attention to the horrible things happening in Syria.

Dr. Arie Avidan, deputy head of the ophthalmology department in a hospital where Syrians are treated illegally, called the doctors to tell the world about the state of affairs in Syria. He wants everyone in the decision-making capacity, including Obama, European and Russian leaders, to learn about the situation and urgently do something. Do what, distinguished Mr. Avidan? Why are you not answering this question? Is the Israeli government answering it for you in the right context?

For example, aforementioned Ms. Amos knows what to do. At a meeting of the UN Security Council she called on the Council to use all its political authority in relation to the regime and the opposition to allow humanitarian workers access those in need. This is an odd call, because Ms. Amos cannot but realize that it is purely rhetorical. Her task is much easier - to form a negative image of the legitimate government of Syria in the eyes of European and American residents, and if it cannot be removed by force, remove it peacefully.

Here is another biased doctor, a former director of the organization "Doctors without Borders" Jean-Herve Bradolem who spent the last two months in northern Syria, in the province of Aleppo, where he led a field hospital. Upon his return from Syria, he told the newspaper Le Monde that it was nearly impossible to meet the usual major "players" in Syria - the UN, the Red Cross and Red Crescent. He said that they were working in the government areas and could not cross the front line.

Therefore, all their aid goes to the Damascus regime, said the disappointed doctor. Why would he care? His business is to treat people, not to engage in politics. Then Bradolem noted that the war has completely disorganized the Syrian health care system. He said that due to insufficient care and a shortage of medical supplies, people die after a road accident, from heart failure, and as a result of a complicated labor. Why would Mr. Bradolem think that the war brings prosperity? Who is to blame for this collapse?

A British doctor David Nott who introduced himself as a vascular surgeon practicing in a hospital in Chelsea and Westminster Hospital in London particularly stood out. He spent five weeks as a volunteer in a hospital in the north of Syria. On October 19, he told British The Times, that the snipers, mercenaries from the army of Bashar al-Assad "have reached a new level of violence, deliberately firing at pregnant women." Nott was talking about snipers fighting on the side of Assad, mercenaries from China and Azerbaijan. The doctor argued that this was the opinion of the majority of local residents.

Nott said that they could hear the snipers winning packs of cigarettes for a certain number of high-precision hits. As evidence, the doctor showed an X-ray of a baby in the mother's womb with a bullet in her head. Nott said that he has not seen evidence of foreign aid reaching those in need. This is a great publicity stunt, much better than that of Bradolem who said that he saw the assistance only reach the Assad regime. But The Times readers quickly exposed Nott. It turned out that he was a military doctor who could not testify impartially, and an X-ray was fabricated and depicted a fully born child rather than a fetus.

Sometimes doctors understand that their data is used for propaganda purposes. A non-governmental international organization "Doctors Without Borders" (DWB) was shocked by how its communiqué of August 24 was used. The communiqué indicated that three hospitals in the district of Damascus received 3.6 thousand patients with symptoms of neurotoxicity (in a high-profile case of a chemical attack in a suburb of Damascus on August 21). DWB said that it distanced itself from the American administration and other government organizations that repeatedly quoted the communique to justify a possible military intervention in Syria.

Meanwhile, the Deputy Minister of Foreign Affairs of Syria Al-Faisal Mekdad responded to the statement of Valerie Amos. His words were quoted only by one Syrian agency, SANA, and even in Russia only one agency quoted him. He stressed that the main problem impeding the delivery of humanitarian aid to some provinces was attacks on convoys by terrorist groups.

Many food convoys were seized by terrorists, but this has not caused a single protest or comment in the West. This confirms the hypocrisy and bias of those supposedly concerned about the humanitarian situation in Syria, Mekdad said. The Minister noted that before the crisis, Syria was an advanced country in the region with developed health care, social services, food security, clean water, and everything else necessary for life.

Who has destroyed Syria? Think about General Wesley Clark, who in 2001 described the Pentagon's plans to overthrow the governments of seven countries in five years: Iraq, Syria, Lebanon, Libya, Somalia, Sudan and Iran.

There are also statements of former French Foreign Minister Roland Dumas, who stated on French television in 2009 (two years before the civil war in Syria) that Britain was going to topple Assad through the use of mercenaries. Thus, all allegations of Bashar al-Assad are an attempt to avoid responsibility for the crimes that the United States and United Kingdom have committed in Syria with the help of their accomplices-financiers - Saudi Arabia, Qatar, Turkey and Jordan providing a base for terrorist training.

You have to ask Ms. Amos why an organization like the UN did not condemn these actions.