For the twenty-second consecutive year, the United Nations General Assembly has issued a resolution which calls for an end to the economic blockade imposed against Cuba by the United States of America, with 188 votes in favour, two against and three abstentions. The international community calls for an end to Washington's inhuman blockade. 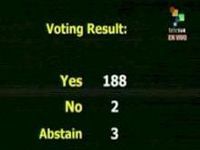 UN approves the 22nd consecutive year resolution calling for ending the embargo on Cuba - The General Assembly of the United Nations (UN) approved on Tuesday (29) a resolution that calls for an end to the U.S. embargo on Cuba. With 188 votes in favor, two against and three abstentions, the multilateral agency renewed for the 22nd consecutive year the request for termination of the sanctions.

The resolution on the "Necessity of ending the economic, commercial and financial embargo imposed by the United States on Cuba," is accompanied by a report of the Secretary-General, Ban Ki -moon, who presents the responses of the Member States of the organism. The embargo was imposed in February 1962.

The end of the embargo is expressly advocated by the United Nations Program for Development (UNDP). "The situation in 2012 was similar to that of the previous years. The blockade affects the foreign economic relations of Cuba and its effects can be observed in all spheres of social and economic activities of the country,"said the UN agency.

The Economic Commission for Latin America and the Caribbean (CEPAL, ECLAC in English) said that Cuba has been modernized, but the lock-down is an impediment to the changes that the government of Raúl Castro began performing.

"Advances in the process of updating the economic model are hindered by the blockade and the inclusion of Cuba, since 1982, in the U.S. list of sponsors of state terrorism," stated ECLAC.

ECLAC found that, last year, the U.S. government had not made ​​efforts to lessen the impact of the blockade. "The damage accumulated from 1962 until December 2011 represents more than $1 billion, according to the latest report available in Havana ," stipulated the statement.

Despite the accumulation of damage, Cuba has still been making changes. Raúl Castro's government has passed a new immigration policy that facilitates the travel of Cubans abroad and also the arrival of tourists to the island.

Similarly, the United States, since last year, has increased the fixed-term tourist visas for Cubans, from six months to five years.

From the Portuguese version
* With information from TV and Telesur multistate Prensa Latina (Public News Agency of Cuba)
http://www.patrialatina.com.br/editorias.php?idprog=a652e914c736dfaf8a6667ae6936f0d6&cod=12688