US to destroy Paradise Island

Pagan Island, an idyllic Pacific Island in the Marianas, home to thousands of species of flora and fauna, some of them unique, and enjoying a perfect ecological balance, is facing Armageddon: in March of this year the US military announced its intention to use the Island as a live-fire training range. In plain English, they plan to blast it to pieces. 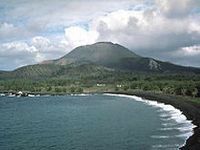 This is not the first time the US military will either take over an island or trash it, and then leave it uninhabitable for decades to come. It has happened before, countless times. It happened in San Clemente, it happened in Diego Garcia, it happened in Vieques, in Ka'ula, in Kaho'olawe, in Farallon de Medinilla, in Kwajelein, Enewetak and Bikini.

Now it is the turn of Pagan (pa-gán) Island.On March 14 this year the Department of the Navy made a statement in the Federal Register of its intention "to prepare the Commonwealth of the Northern Mariana Islands Joint Military Training Environmental Impact Statement/Overseas Environmental Impact Statement... to establish a series of live-fire and maneuver Ranges and Training Areas (RTAs) within the Commonwealth of the Northern Mariana Islands (CNMI) to meet this purpose." (1)

So, goodbye to the unique species which have inhabited this paradise for thousands of years and goodbye to the livelihoods of the Pagan Islanders, the indigenous population which has lived with and beside the endemic species in harmony for three thousand years. How many of the island's rare birds, bats, insects and plants could be destroyed by toxins or by bombing campaigns?