The "moment of truth" on the Syrian issue has come. Finally, the threat of the West to overthrow the "illegitimate Assad regime" got real. Previous experience of the wars conducted by the West in the Middle East and North Africa has shown that wars with "dictators" and "democratization" just turn into a snowfall of hundreds of thousands of ammunition, taking lives of hundreds of thousands of people. 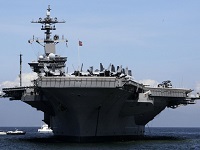 Despite the fact that from the very beginning of the Syrian conflict it was obvious that Syria was too desirable of a targe for the U.S. and its allies, there was still hope that Syria with the help of its allies will be able to withstand the continuous pressure of foreign fighters and avoid direct foreign intervention. But a miracle has not happened.

Under the circumstances Syria has no other choice than to prepare to face the aggressors. U.S. Navy and the UK have already expressed their willingness to conduct missile strikes, which, according to some reports, may begin within a week. As usually, USA, ignoring all international norms and laws, despite the presence of UN observers in Syria, delivered the sentence. Apparently, it did it a long time ago and the Russian and Chinese veto in the UN Security Council does not mean anything.

The only thing that stopped them so far is the lack of a suitable pretext for an attack, the presence of a huge arsenal of chemical weapons in Syria, as well as rather massive air defense and unpredictable reaction of Iran.

The U.S. allies have been trying to find a pretext for a long time. First Erdogan sent fighters to death and scattered shells, then Netanyahu sought "missiles for Hezbollah" in Syria and shelled the Syrian army in the Golan with artillery fire in response to a mortar fire of Syrian rebels, but to no avail. These provocations did not work, and the West was not able to raise a ruckus big enough to justify pulling significant forces to the Syrian coast.

The West had to use another trick and played a long proven card of chemical weapons in Syria.

A chemical attack that took place in the vicinity of Damascus became the very "point of no return" in the opinion of the "Friends of Syria."

It was clearly not in the interest of the U.S. to understand the details of the crime, because it is clear that it made no logical or tactical sense for the army to use such a weapon against civilians, most of whom support it. In addition, the Syrian authorities are well aware of possible consequences. Of course, now the West needs to quickly cover the tracks of doings of their own appointees, or perhaps even their own security forces.

But what should Russia do not to leave its ally in trouble?

The answer is obvious. If Russia cannot tie the hands of the U.S. in a diplomatic way, it would have to take another, ultimatum approach. A very impressive presence of the Russian fleet at the Syrian banks would be sufficient to blunt the claws and beak of American Eagle. And yet, so far the missile cruiser "Moskva" is far away in Venezuela on a business trip (which cannot be an accident). Four U.S. destroyers (Mahan, Gravely, Barry, and Ramage) are located in the Mediterranean Sea. An aircraft carrier Harry Truman with a group of two missile cruisers (Gettysburg San Jacinto) and two destroyers (Bulkeley and Mason) are in the Arabian Sea. In addition, the current location of two nuclear submarines of class Ohio is unknown. The Royal Navy has two frigates in the Mediterranean, as well as a helicopter and a submarine with Tomahawks allegedly spotted over the weekend in Gibraltar.

What about Iran? After all, earlier it spoke very harshly in respect of any use of force in Syria by external forces, and even mentioned retaliation in case of a threat by the aggressors. Apparently, the U.S. still does not know what to expect and is preparing for any Iranian response, pulling reinforcement to its shores

China is still limited to the legal side of the matter and avoids any harsh statements.

What happened to the staunch allies of Syria? If we reject all conspiracy theories, then this indecisiveness can be explained by the fact that they were caught off guard. Apparently the intelligence of these states was not able to identify a huge threat posed by another chemical provocation of the West.

The threat of a missile attack by the Royal Navy and the U.S. in the near future is very high. There are reports that a strike will happen as early as Thursday. But we should not be making rush forecasts. The more so that the authorities of the two countries radically opposed to Syria talk about their plans too openly, naming military bases to be used and the timing of the attack. These plans may be an intentional misinformation that allows to prepare for a large-scale aggression

Syria has the most dense air defenses in the Middle East, and therefore in order to effectively strike on its territory and defeat the Syrian army it should be neutralized. This would require over 1,000 aircraft which neither the United States nor the United Kingdom have in the region. Also in the early hours of missile and air strikes they would need to neutralize launchers of Syrian ballistic missiles, which can cause great harm to its very unfriendly neighbors, even judging by the effects of chemical provocation of the West near Damascus. The outdated Patriot units along with a few "Arrow" units obviously do not fully protect the northern and southern neighbors of Syria.

In addition, the experience has shown that in Libya the West had to dump thousands of precision-guided munitions for several months to turn the tide. But the Syrian army is much stronger than the Libyan one and the West is unlikely to be able to succeed without a ground operation. 325,000 soldiers and over 50,000 militia fighters would not allow the so-called "opposition" to win even under the conditions of total bombings and complete control over the air space of the West.
A ground operation will require a foothold that can be created on the territory of Turkey or Jordan, but this would take time.

Of course, no one will back out. Apparently, the tragic event in one way or another will happen in the next few months. Most likely, the anti-Syrian coalition will only expand during preparation for an invasion. One only has to note that the blood of innocent people that the West will shed for the sake of its interests will not be easy to wash off with rhetoric or corrupt media. It is logical that the criminals will pay dearly for their actions because the Earth is round.