To date, the only use of chemical weapons in Syria has been by the Syrian so-called opposition, you know, the same people (?) who indulge in cannibalism, who are rapists, torturers, thieves and terrorists, who recently sliced the heads off Kurdish children ... and why were the videos uploaded from outside Syria the day before the "attack" happened? 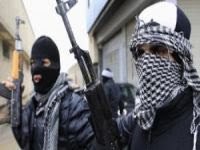 And just as the UN inspectors arrive... there is a so-called "chemical" incident, a false flag one of course, again, but once again, not a very intelligent ploy by the Syrian "opposition". If one is going to set up a false flag chemical weapons attack, one has to make sure it is deployed in an area where there is a massive advantage in using such weaponry, namely in an area where there is massive advantage to be gained in an active theatre of war.

So, in an area where there has been fighting until recently but where the Syrian Arab Army (Government) has been making steady progress and where the terrorist opposition forces have been getting hammered, it does not make sense for the Government forces to use nerve gas, and it makes no sense at all to use it against large numbers of civilians, including children, who appear to comprise the majority of the victims.

Therefore this morning's alleged chemical weapons attack in Ghouta, Eastern Damascus countryside, would not provide any advantage whatsoever to the Government forces, especially with the UN mission arriving in the country but it would provide a huge advantage for the "opposition" especially if the western media steamroller swings into action riding the crest of a drum-beating wave driven by politicians of the caliber of Obama, Cameron, Hague and no doubt their French poodles to justify a US intervention from Jordan.

We have seen the chemical weapons story before, only for the west to back down and refuse to investigate every time the Syrian "opposition" makes allegations the Government has used chemical weapons, when it then becomes obvious that the Government would not, did not, has not, does not and never will deploy chemical weaponry against its own people. Terrorists do, real soldiers do not.

Quite apart from all this, why were the "videos" providing "evidence" of this alleged chemical weapons attack posted on August 20, when the attack was supposed to be made in the early hours of August 21? They were certainly not uploaded from Syria.

And let us observe this from another angle: does the presence of the UN team in Syria to investigate use of weapons of mass destruction favour the Government? Yes, because it will discover the Government has not used any. Will it favour the terrorists? No, because they have used chemical weapons before and everyone knows so, that is why the west went silent about previous attacks after accusing the Government. After all, in May the UN investigation team leader, Carla del Ponte, stated there was evidence the "opposition" had used chemical agents, including Sarin gas. This came after two Syrian "opposition" leaders were caught on an audio recording of a phone conversation discussing attacks with chemical weapons and let us not forget the "opposition" laboratories last year filmed gassing rabbits with nerve agents. In this column I predicted today's event at the time.

The Syrian authorities strongly deny today's claim as being completely untrue. For the Government, these wild and absurd allegations denote the hysteria and demoralized state the "opposition" is in, as it is pressed back on all fronts.

Let us go further: with the US troops massing in Jordan, is this the event Washington needs to justify an intervention? We have seen it all before... and who would be surprised at anything Washington pulls out of the hat? After all the spectre of an August attack in Syria by Washington has been circulating for months.

And let us be intelligent here: if the attack was supposed to be launched in Syria on August 21, then why do the videos supposedly covering the supposed event show the date August 20? Because they were uploaded from London... or Washington?