Egypt on the brink of a civil war

Clashes between the police and supporters of Mohammed Mursi in Cairo resulted in several deaths and injuries. The information on the number of victims is contradictory. The situation in Egypt remains tense. The authorities and observers fear that the conflict may escalate into a civil war. The army is said to be doing everything possible to prevent this from happening. 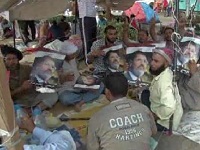 The Egyptian military began to act against the "Muslim Brotherhood" who refused to recognize the authority of the Transitional Government. The Army issued a recent statement encouraging Islamists to join the "road map" of political settlement within 48 hours. The Islamists are also determined.

On Thursday, the leader of the "Muslim Brotherhood" Mohammed Badie called on his supporters to return the slogans of the revolution of January 25, 2011. This has to do with the continuation of peaceful protests in support of Mursi. An online statement talks about the necessity to reject the bloody military coup accompanied by numerous crimes. Fierce fighting between security forces and Islamists has been ongoing in Cairo and Alexandria since Friday. According to official data at least 80 people were killed, and there are hundreds of wounded.

Recently, millions of demonstrators demanded the resignation of President Mohammed Mursi who carried out the policy of Islamization of the country. Supporters of the liberal opposition accused the head of state of an attempt to establish a dictatorship. However, the removal of President Mursi from power did not lead to the resolution of the protracted political crisis. Numerous supporters of the Islamists outraged by the actions of the army took to the streets of Cairo. The military coup took place in Egypt on July 4, when head of the armed forces announced the removal of Mursi from power and the suspension of the constitution.

Later, the Islamists launched an unsuccessful attempt to free the legitimately elected President. Numerous demonstrators approached the barracks of the National Guard where Mursi was thought to be hiding. After an unidentified officer shot and killed an Egyptian, the military broke up the protest. 70 people were killed in clashes and hundreds injured. The tragic events in central Cairo became a serious warning, both for the military and for the entire Egyptian society. The danger of escalation of the conflict between the supporters and opponents of the Islamists to a civil war has increased dramatically. The military coup ended with the change of government in Egypt, and all attempts of "Muslim Brotherhood" to protest against the removal of Mursi have failed. Head of the Constitutional Court Adly Mansour who has agreed to form a government of technocrats and liberals was appointed Interim President.

Meanwhile, numerous clashes between supporters and opponents of Mursi are ongoing across the country. The U.S. and EU call on the military to abandon the disproportionate use of force against demonstrators.

It is not clear how long riots that engulfed dozens of Egyptian cities may continue. The army promises to do everything possible to protect civilians and prevent the outbreak of a civil war. The authorities suggested amending the constitution and holding a referendum. Many Egyptians seem to be tired of the revolutionary upheavals and are ready to support a return to order. Observers do not rule out the possibility that the country could return to a modified constitution of 1971, adopted during the time of Hosni Mubarak. The most radical parties will be excluded from the political life of Egypt.

The rule of Mursi who had not been able to cope with the economic crisis, ended ingloriously, and now the army, with the support of local liberals, is establishing its rules. Persecution of the supporters of "Muslim Brotherhood" is getting more intense. In the first days of July over 300 members of the movement were arrested.

On Friday, the media reported that the Public Prosecutor's Office ordered to arrest the former Egyptian President Muhammad Mursi for 15 days and interrogated him about the circumstances of his escape from prison in 2011. According to published reports, the Egyptian prosecutor's office suspects that the escape of prisoners from the activists of the Islamist movement "Muslim Brotherhood", including Mursi, was organized with the participation of the militant Palestinian terrorist organization Hamas. Mursi is facing charges for murder of prisoners and prison guards, as well as kidnapping of soldiers. On Sunday, Acting President Mansour Adly authorized the Prime Minister to give the army the right to arrest citizens to stop violence in the country.

Most likely, the situation in Egypt will remain volatile for a long time. Parliamentary elections will be held no earlier than February of 2014, and until then the country will be governed by the interim government that not everyone is happy with. At the same time, the army was able to win the support from the outside. Saudi Arabia and other Middle Eastern states have agreed to give Egypt $5 billion of aid to stabilize the economy. At the same time, any possible attempts of the Islamists to recover ground lost while in power are most likely doomed to failure.