Last week, after the new IAEA report on Iran was released, the topic of Iran's nuclear program reappeared on the front pages of newspapers. Despite the fact that President Hassan Rouhani is considered a more moderate politician than his predecessor, Mahmoud Ahmadinejad, the nuclear issue does not have an easy solution. On July 16th, a meeting of representatives of the "six" was held in Brussels to discuss the possibility of a diplomatic solution to the dragged out Iranian nuclear crisis. 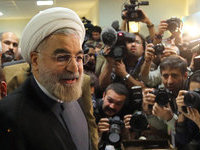 Talks between Iran and the IAEA are to be held after the inauguration of President Rouhani in August. Meanwhile, Tel Aviv once again threatened Tehran with a preemptive strike.

The victory of a moderate reformer Rouhani at the June presidential elections was a major event not only for Iran but for the entire Middle East. Tehran is talking about the beginning of the liberalization of the political life of the country. The topics discussed included impending relaxation of the government control over the private lives of citizens and loosening of censorship in the cultural sphere. The changes are expected to extend to the foreign policy of the Islamic Republic of Iran as well. During his first press conference Rouhani announced his intention to take steps to normalize the relations with neighboring countries, especially with Saudi Arabia. At first, U.S. officials have expressed moderate optimism with regard to the change of the Iranian government. The U.S. president Obama said that it was clear that Iran had a strong desire to work with the international community in a more positive way.

However, subsequent events indicated that Washington was not going to give up a hard line against Tehran. Recently the UN Security Council heard a report on Iran. The U.S. side has once again advocated the extension of sanctions against the regime of the ayatollahs. U.S. Ambassador to the UN Rosemary DiCarlo said that the sanctions committee should consider the issue of illegal Iranian arms supplies to groups in Lebanon, Syria and Iraq. In the report it was noted that the launches of "Shihab-1" and "Shihab-3" missile in the summer of 2012 during a training exercise "Great Prophet-7" were a serious violation of one of the resolutions of the UN Security Council. According to experts, these are missiles capable of delivering nuclear weapons. UN resolution 1929 states that Iran will not undertake any activity related to ballistic missiles capable of delivering nuclear weapons, including launches using ballistic missile technology.

In addition, UN experts also suspect that Iran has violated the embargo on weapons export. In January of 2013 a vessel containing Iranian weapons meant for the rebels was captured in Yemen. Australian ambassador in the UN Gary Quinlan stated that several countries members of the UN Security Council refused to support the conclusion of the committee, The Jewish Times reported. While the U.S. does not consider this threat to be immediate, Israel military are seriously concerned with the successes of the Islamic Republic in developing new types of weapons.

Tel Aviv's position on the Iranian nuclear program remains extremely tight. Israeli Prime Minister Benjamin Netanyahu did not rule out the possibility of a preemptive strike against Iran without the U.S. assistance. "I will not wait until it's too late," said Netanyahu in an interview with U.S. channel CBS. At the same time, the Iranian president Rouhani said that he did not intend to abandon support for the Lebanese Shiite terrorist group Hezbollah that poses a serious threat to the security of Israel.

The analysis of the new United Nations report has once again revealed significant differences between Russia and the U.S. on the Iranian nuclear issue. Moscow believes that the action by the international community to address the issues related to Iran's nuclear program are undermined by unilateral sanctions that often have extraterritorial nature, which is unacceptable from the point of view of the international law. This opinion was recently expressed by Deputy Permanent Representative of the Russian Federation to the UN Petr Ilyichev during his speech at the briefing of the Security Council on non-proliferation of nuclear weapons.

"The conclusions and evaluation of the committee should only be based on reliable and verifiable information and a careful analysis of all the circumstances of the incident. Russia will continue to make every effort to achieve progress in the settlement of the situation around the Iranian nuclear program," the UN website in Russian quoted Ilyichev. In any case, Moscow and Beijing have refused to approve the anti-Iran report designed to enhance the international isolation of Tehran.

On July 16th, six international mediators in Brussels discussed the prospects of negotiations on the Iranian nuclear issue. Observers note that the new Iranian leadership may make concessions to the West in order to avoid further escalation of tensions in the region. The foreign policy of President Mahmoud Ahmadinejad has led to a significant weakening of the country in the international arena. Tehran barely has any allies in the Middle East because the tightened sanctions had a negative impact on the economic situation. However, this does not mean that Iran will agree to shut down its nuclear program it started many years ago in favor of the U.S. and its allies. The country's leadership continues to speak of readiness to ensure the transparency of its nuclear program. However, statements about a breakthrough in resolving the Iranian crisis are premature. It is expected that the next round of talks between Iran and the IAEA will be held in the fall, after the inauguration of President Rouhani.