While major powers continue to cross swords around Syria, a little further south, at a distance of a thousand kilometers, another conflict is flaming. The conflict between Egypt and Ethiopia may become the first struggle of a new type for natural resources, or water, to be more precise. Futurists are correct in their predictions as the 21st century will become the century of wars for survival. 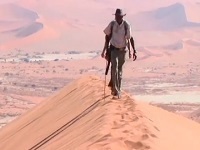 Ethiopia, thanks to the support of the Soviet Union, was at the peak of its power during the 1970s. The country was a regional leader in East Africa. Since that time, the country has experienced several economic crises, multiple civil clashes and two wars - with Eritrea and Somali armed groups.

Leftist forces, led by the recently deceased Meles Zenawi, proposed a concept of national renaissance. The concept stipulated the construction of a large power plant on the Blue Nile that would be called "The Grand Ethiopian Renaissance." The height of the dam will be 170 meters, its length - almost 2 kilometers.

For Africa, it would be a fantastic project, just like the cost of it - nearly $ 5 billion. The design capacity of the plant is 6000 MW, and there are no other similar power plants on the black continent. As soon as the plant is launched, Ethiopia receives a powerful impetus for development, satisfies the needs of its own economy in energy and water, and also obtains a reliable channel of revenues from the export of electricity. This is a classic example of how a variety of economic and geopolitical problems could be solved in nearly one day.

However, these intentions of Addis Ababa turned out to be highly disturbing to Egypt, the territory of which lies upstream of the Nile. In case the hydropower plant is built in Ethiopia, Egypt loses more than 20 percent of water supplies and at least 40 percent of energy produced by hydroelectric power plants (mostly the Aswan one). This is a disaster for the economy and agriculture of Egypt. Egyptian President Mursi said that he was ready for anything, because the river Nile was the natural wealth of Egypt. "If Egypt is the Nile's gift, then the Nile is a gift to Egypt. The lives of the Egyptians are connected around it... as one great people. If it diminishes by one drop then our blood is the alternative, Mursi stated.

A mufti of Egyptian Islamist group Al-Gama'a al-Islamiya stated on Al Arabiya TV channel that he would declare Jihad to Ethiopia, should the country begin the construction of the power plant. The mufti also accused Israel of being a part of the project. According to him, the construction of the dam was a "conspiracy to put pressure on Egypt."

We would like to note here that the mufti is wrong. Israel learned how to put pressure on Egypt (and some other countries) a long time ago, by funding politicians of interest directly. Needless to say that this method is a lot less expensive.

In the beginning of June, Egypt urgently sent a delegation to the territory of former Somalia to assess the prospects for the revival of the Somali army that used to be at war with Ethiopia, and the creation of a military alliance with the unrecognized state of Somaliland. It is highly likely that Eritrea will take Egypt's side, taking into consideration the fact that Ethiopia defeated Eritrea in 2000. The governments of Sudan and South Sudan supported the Ethiopian government. Another developed country (by African standards) - Kenya - has not expressed its opinion on the matter. However, Kenya is interested in receiving cheap electricity from Ethiopia.

Six African countries, including Burundi, Kenya, Rwanda, Tanzania, Uganda and Ethiopia signed an agreement that replaced a number of documents of the colonial era. Egypt used to consume up to 70 percent of the Nile waters and could veto any decision on the construction of any type of hydro-technical facilities. Nowadays, restrictions and quotas have been lifted.

As for Egypt, if it were only about the military conflict, then the army of Egypt, which is 10-15 times superior to the armed forces of all signatories and their allies in terms of manpower and 20 times - in terms of tanks and combat aircraft, would crush the enemy in a few days. However, Egypt and Ethiopia have no common border, so the Egyptian military maneuver around semi-guerrilla forces, Somali groups and unprofessional Eritrean armed forces. In addition, the political situation in Egypt is far from being stable. A war could make matters even worse.

To crown it all, Egyptian President Mohamed Mursi has a very limited set of moves to resolve the crisis. Mursi is doomed to start combat actions. If he uses political methods, many would accuse him of betraying vital interests of the country, which would lead to a national revolution. Quite on the contrary, a successful military campaign against Ethiopia would retain the balance of the Egyptian economy and dramatically reduce the political weight of the opposition. In this case, Mursi would be able to take full control of the political situation and finish his reforms.

Should the conflict occur, it will go down in history as the first large-scale war for water.

Herbert Marcuse, the founder of the theory of overpopulation of the Earth, predicted that by the middle of the XXI century, wars for water, food and energy resources would completely replace class wars for geopolitical influence. In a nutshell, people will fight for misery that will help them survive. Will his predictions come true?