Permanent peace is the need of time, why politicize? 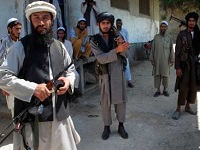 Reading the commentaries about the expected Doha talks and the Frustration about their repeated breakdown a couple of days ago it seems necessary to give the matter another serious thought to achieve peace in Pakistan and Afghanistan the two victims of the great game, which failed to attract serious attention due to vested interest of the proverbial monkey who are playing hide and see while PKP and Karachi are bleeding profusely and the world conscience is in deep slumber: What is actually happening and what can be expected from all the efforts?

The US had to learn the same lesson as the Russians in the eighties and the British in the 19th Century: History records that Afghanistan cannot be conquered and held by occupying forces.

One of the largest problems of the US that is in the middle of an economic crisis and experiences growing unrest and poverty in their own country is the need to wind up the Afghan war and pull out occupation troops from there. While in the early years when Taliban seemed defeated talks with them were rejected from 2005 onwards on flimsy grounds when they reorganized themselves and their efforts were supported by a popular uprising of Afghan people who grew frustrated with missing improvement in their lives, with continued killing of civilians by the foreign occupation troops and just by the arrogant and culturally insensible behavior of them the US developed the idea to undermine the unity among the insurgents by trying to make out and talk to 'moderate' and 'good' Taliban. That of course did not work.

Neither worked the troop surge that president Obama had ordered shortly after his election. With the military success lacking, the economic situation worsening and the popularity of the war dwindling fast in all the involved countries since 2010 all are running for the exit. A group intoxicated with power in US exploited this so-called war on terror to fill their personal coffers through securing outsourced contracts to destroy humanity. Pakistan was threatened to support this plan or get ready to be sent into Stone Age, our spineless dictator compromised national interest for his personal gains and Pakistan's economy got crippled and we have suffered over $ 100 billion in this melee drama.

Why talks in such a situation are also being politicized by certain quarters? It is the defeated US that is eager to have talks and arrive at certain agreement with Taliban. What do they want from Taliban now? In the first place they want to keep their foot in the door. That means they have installed a stooge government that they got 'elected' and that is supposed to represent their interests in future. Secondly, the foreign forces have produced a constitution that is supposed to make Afghanistan a 'democracy' and a secular state which is of course impossible and against the aspirations of the majority of the Afghans.

This constitution -the only sign of some 'progress' in this 'backward' country (according to the West) has to be sustained to protect US interest. And thirdly and mainly, the US wants to keep troops and military bases in Afghanistan in order to keep the stooge government in place and the foot in the door. It is not enough to negotiate this with the Karzai government which is weak and has control only over a small part of the country. In order to secure their interests they need some agreement with the Taliban who after the withdrawal will be a formidable military and political force in Afghanistan. The most likely scenario for the time after 2014 is a replay of what happened to the former stooge government of Najibullah with a civil war among competing for power warlords. The Afghan army which is ill trained and ill motivated will fall apart or be destroyed in between the fighting factions. To prevent this US needs an agreement with the Afghan Taliban.

Now what is the interest of the Taliban in an agreement with the defeated occupational army and country? We read that the Taliban are tired of fighting and want peace now. How probable is this? While weapons and fighting has never been a far away matter from Pashtun and other Afghan people even if the older generation would be 'tired' there is a numerically strong and influential young and middle-aged generation that surely is not tired. Secondly, the Taliban have won the war.

Why would they negotiate at all? They could wait until the foreigners are gone and then act. But they can see that the Karzai government which they do not recognize is negotiating a deal with the US for troops to stay. This they want to prevent and they want to destabilize Karzai and that is why Karazai is also playing his cards. In addition, they are interested to get their fighters out from the prisons in Guantanamo bay and Bagraam. For this latest purpose they have agreed to open the Doha office with diplomatic status and to hold talks there. They will enjoy the hick-ups resulting from their flag flying and not be worried about the breakdown of talks. They have all the time in the world and they know the Americans will have to come back. They won't accept Karzai though at any point as Mullah Omar has repeatedly announced. Even if at some point an agreement is signed -which is very improbable- who says that they will keep to it?

The upsetting fact in the story is that though the US is desperate to talk to the Afghan Taliban they do not want Pakistan to talk to Pakistani Tehrik-e-Taliban. For that reason they keep on their drone attacks on Pakistani tribal territory and the latest success they could yield was the killing of Waliur Rehman who was in favor of peace talks with the government. As a result, peace talks are a far cry right now, and blasts and target killing in different parts of Pakistan are projected on media to have been owned while Pakistan needs immediate steps on war footing. Other than the Afghan Taliban ours have no foreign occupation to fight. But they fight the Pakistani government who is an ally of the US in the Afghan war.

For that Pakistani government has allowed the US intelligence to come to Pakistan in droves and behave as if at home and kill our people. The Pakistan army thinks it cannot do without US military aid and weaponry and is probably the staunchest ally of them. That means in order to have peace in Pakistan the government and the army will have to revise their coalitions. Announce  national policy outlines on foreign issues, especially on our relations with United States in "War on Terror" and over highly controversial, illegal and lethal Drone attacks and internal security to permanently root out the cause of terror.  Otherwise there will be no peace. This is what the Pakistani Taliban will demand in peace negotiations and that is why the US is against it. When will we finally learn what our national interest is inspite of passing of unanimous resolutions and reflection of public aspirations on the issue. Peace at every cost is the need of time. God bless Pakistan.