Will the Switzerland of the Middle East revive ever again?

The relations between confessions in Lebanon become increasingly tense. Recently, Shiite terrorist organization Hezbollah announced open support of the regime of Bashar al-Assad. In response, the Syrian armed opposition fired Grad rockets at Beirut. The opponents of Hezbollah held a series of rallies against interfering of the Shiite resistance in the affairs of neighboring Syria. 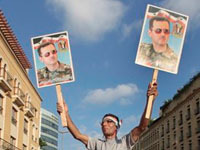 This year marks 70 years of Lebanon's independence. After the First World War, the territory of the country was under French mandate. On November 8th, 1943 the Lebanese parliament made a defining decision to abolish the Articles of the Constitution limiting the state sovereignty. France was forced to accept this decision after a wave of mass protests against the colonial authorities.

After the war, Lebanon experienced a period of economic prosperity. Revenues from tourism in that period increased ten-fold. Lebanon is often called the "Switzerland of the Middle East." However, after the outbreak of the Civil War (1975-1983) the country faced difficult times.

The reason for the outbreak of the armed conflict was the assassination of the guard of the party leader Pierre Gemayel that provoked an attack of the Christian Phalangist at a Palestinian bus. In 1976, Syria sent troops to the neighboring countries to support national-patriotic forces (NPC) and the Palestine Liberation Organization (PLO). Only in the spring of 2005 Damascus completed the withdrawal of its troops from the country under pressure from the international community.

"Today Lebanon is involved in the Syrian civil war. This is somewhat paradoxical, because until recently Syrian troops have played the role of peacekeepers in the Lebanese civil war. In fact, only because of them the war could be stopped in military terms," Said Gafurov, a supervisor at the Institute for Applied Eastern and African Studies told Pravda.Ru. "On the other hand, the Syrians have come and stayed, which caused a great dissatisfaction in the Lebanese society, mainly with the economic component of the Syrians' presence. At the time a significant part of the Lebanese opposed Syria's stay in Lebanon. The then Prime Minister Rafic Hariri who was killed in a terrorist attack had a similar position. His death was blamed on the Syrians, but I strongly doubt that the Syrians could eliminate him," the expert continued.

After the murder of Hariri, a long political crisis ensued in the country. The national unity government collapsed in January of 2011, and Najib Mikati called by many a puppet of Hezbollah became the new Prime Minister. The Syrian conflict has had a great influence on the political situation in Lebanon. In March Mikati resigned, and Sunni politician Tammam Salam was appointed head of the government.

"Now Lebanon is getting ready for parliamentary election, and the situation in the country may be very strange. The outcome of the election is difficult to predict because everything is up in the air to a great extent. Lebanon has a specific system of majority voting. This means that the public opinion can swing in one direction or another, but it would only have an insignificant effect on the results of the parliamentary elections.

"It is interesting to note that the keynote of the upcoming elections, or the election campaign, is related to Syria," said Said Gafurov. "I recently traveled to Beirut, and saw portraits of Bashar al-Assad everywhere. Then I thought - it's a neighboring country, in Moscow, for example, you would not find portraits of Ukrainian presidential candidates. Maybe someone sympathizes with Tymoshenko, maybe someone is sympathetic towards Yanukovych, but no one would think to hang their portraits in the streets.

Yet, it is true for Lebanon, and so the parties diverged into two factions. Today in Lebanon there is a very interesting situation when Christian clans are divided among themselves, and the main contradiction is between the Sunni and Shiite clans. Now there is certain equilibrium between them as each of the two factions is supported by 30 percent of the population, while 10 percent of voters support the Druze and other minorities. The Sunnis have no single center, and much of the Sunni population supports the current government of Hezbollah. At the same time, the Muslim brothers are fighting on the side of the rebels in neighboring Syria. Therefore, the fact of greater organization of the Hezbollah block and its Christian and Sunni allies suggests that if elected, they will form the next government. "