Turkey enjoys its own special Summer of Love

Mass protests against the policies of Turkish Prime Minister Recep Tayyip Erdogan have been ongoing In Turkey for two weeks. The authorities called on the demonstrators to leave the Taksim Square in Istanbul where a tent camp was set up. Observers note that, starting Tuesday, the protests across the country have been on the decline.

Meanwhile, Ankara continues estimating the losses caused by the riots that engulfed 67 towns. According to the Minister of Internal Affairs of Turkey Muammer Guler, 280 offices and shops were damaged, and dozens of police cars smashed. The total damage has reached the astronomical sum of $40 million.

The anti-government protests in Turkey began with a seemingly innocuous campaign of environmentalists in defense of Gezi Park in Istanbul. After the police used tear gas against the demonstrators, unrest occurred in a number of Turkish cities. 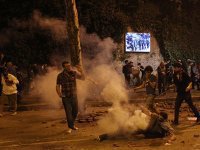 Upon his return from Africa, Erdogan rushed to accuse the extremists of organization of mass protests. Fearing further expansion of the protest movement, the Turkish Prime Minister tried to convince the Turkish people that the riots had nothing to do with democracy. At the same time, the position of the Turkish President Abdullah Gul regarding the participants in the protests was somewhat different from that of Erdogan. The President recently said that he considered peaceful protests part of democracy. Similar statements were made in a number of Western countries, such as the U.S. and the UK. Gul believes that it would be wrong to draw an analogy with the Arab revolutions in the Middle East.

Some observers describe the movement Occupy Gezi as a Turkish version of the "Summer of Love." The events triggered by a group of American hippies took place in San Francisco in 1967. The Wall Street Journal reported that others compared it with the social protests that swept the world in 1968.

Yet, the government supporters warned that a similar trend was observed in the period preceding the military coup in Turkey in 1980, when the army had to intervene to stop political and social chaos. These people said that if the unrest was not immediately suppressed, it was likely to lead to a new outbreak of violence, because the protest movement did not have leaders capable of influencing the protesters, The Wall Street Journal reported.

At the same time, the massive protests in Turkey demonstrated the growing frustration in the community by Erdogan's long-term rule. Turkish liberals have long been dissatisfied with the policy of Islamization of the country implemented by the ruling Justice and Development Party. Secular opposition opposed the plans to build a mosque in Gezi Park. Many residents were also angered by the imposed restrictions on the sale and consumption of alcoholic beverages. However, Erdogan has been denying the accusations of the liberals. RIA Novosti quoted him saying that there was no prohibition of alcohol but only a regulation of its sale. He added that many countries had similar legislation, and that the ban on the sale of alcohol at gas stations was a right measure to help avoid accidents on the roads. Recently the Turkish authorities agreed to listen to the demands of the protesters, but gave no promises. Activists met with Deputy Prime Minister Bulent Arinc and demanded that the authorities guaranteed the conservation of Gezi park in Istanbul. Over the weekend, demonstrators did not leave Taksim Square, but the protests were entirely peaceful.

Today, leading analysts wonder whether the riots in Istanbul would become another incident of "Arab Spring." However, most experts do not believe that the Egyptian scenario can be implemented in Turkey. Ankara skillfully uses the traditional policy of carrot and stick to keep control of the situation and prevent a recurrence of the events that took place in Tunisia and Egypt.

Pavel Shlikov, Candidate of Historical Sciences, Senior Lecturer of the Department of History of the Middle East at the Institute of Asian and African Studies (IAAS) at Moscow State University shared his thoughts about the nature of the protest movement in Turkey with Pravda.Ru. "In the political culture of Turkey, civic engagement, protests, demonstrations, and rallies are quite common phenomena. Taksim Square and the streets of central Istiklal where the Consulate General of Russia is located, is a place where protests occur nearly every weekend. Before, they did not cause such a severe reaction of law enforcement agencies. After the protesters were dispersed by gas followed by water cannons, the nature of the protests and the list of the demands that protesters gave to the local authorities, and now the central government, has undergone major changes. The demands went beyond environmental ones and became political. The most important demand addressed by the media is, of course, a call for Erdogan to resign.

The Justice and Development Party is largely the party of one person. This is both an advantage and disadvantage of the ruling party. The calls for Erdogan but not Gul to resign and the separation of the political elite are not a coincidence. This is a projection of how the relationships are built between the political elite and the party itself. Erdogan tried to take the role of prima, and thus became a man who had full responsibility. The post of President of Turkey occupied by Abdullah Gul is a nonpartisan post. Gul stressed that elections cannot be considered a single component of democracy. Thus, he opened a channel of communication with the protesters. The problem is that the protesters have no leader, someone who could fully engage in a dialogue and guarantee a particular trajectory of the protests," said the expert.