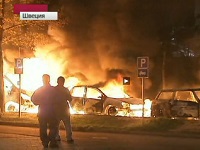 Dateline Dalarna, Sweden - It was 26 May, unrest going strong in Stockholm's suburbs and far beyond, when Sweden's major conservative paper, Svenska Dagbladet (SvD), had a front-page headline that read: "The truth is that you received a surge of setting the powers that be in their place" ('Sanningen är att du får en kick av att sätta makten på plats').  The quote was delivered by one of those involved in the unrest, amply highlighting the feelings of frustration and anger that were being widely expressed - the ever spreading reports of burning cars further emphasized the point.  Long-smoldering tensions had begun to burn.

Over the very weekend that the SvD piece was published, reports emerged of a 'Citizen's Guard' comprised of neo-Nazis and football hooligans that were reported as spreading 'terror in the suburbs of Stockholm', according to deceased author Stieg Larsson's old magazine, Expo.  This report also put the number of people in this 'citizen's group' at over 800.

When I heard of this, I recalled the street battles once fought in Germany between Nazis and Leftists.  And, a party with neo-Nazi roots, the Sweden Democrats (SD), has been in Parliament since 2010, to my eyes the mainstream parties shifting subsequently rightward following the SD's election.

The Swedish riots have ended, (though, arguably the main reasons for them have not) and while most of the media is trying to explain what happened, the answers do seem to have been provided 12 March, over two months before the unrest began.  At that time I interviewed Paul Lappalainen, a senior Swedish civil servant who had run the Government's 2005 inquiry into 'structural discrimination'.  It was a most prescient moment when he said "I prefer not seeing riots", but warned it "seems that policymakers are not trying to avoid the conditions within which riots occur."

Contrary to what many believe Sweden to be, while the country's borders may indeed be open, certain 'cultural borders' within it are another matter, assorted reports documenting the prejudice minorities and immigrants daily live with.  The fellow quoted above in 26 May's SvD article observed that, regardless "if you try, there is no escape from here" ('om man försöker finns det ingen utväg härifrån'), no way out of the 'dead-end' so many have been led to.  He also bitterly spoke of the lack of results dialog and political efforts brought.

In reading the SvD piece, one can feel the frustration and anger of those 'on the streets'.

In May 2012, Pravda printed an earlier report this journalist made, 'Living in brave new Sweden, recalling the 1930s', an excerpt reading: "Reports by the Swedish government have revealed pervasive 'structural discrimination' against both those of foreign origins and other minorities, discrimination from official sources posing a particularly difficult threat.  Of course, history demonstrates too well what may occur when xenophobia enters the official structures of a state, the worst kinds of discriminatory acts finding a seldom questioned legitimacy."

Swedish discrimnation against minorities and immigrants 'is well-documented'.

What the truly courageous civil servant Lappalainen emphasized was a 'structure' of pervasive and disenfranchising discrimination, discrimination discussed in the report his 2005 inquiry provided, 'Det blågula glashuset - strukturell diskriminering i Sverige' (The blue/yellow glass house - structural discrimination in Swethden); by a 2007 report by the UN's International Labour Organization, 'Discrimination against Native Swedes of Immigrant Origin in Access to Employment'; by a 2008 report by the government's Swedish National Council for Crime Prevention (Brå), 'Discrimination in the criminal justice process in Sweden...The direct and indirect discrimination of individuals from a non-Swedish or other minority background'; and, in a November 2012 government report, 'Främlingsfienden inom oss' (The enemy of strangers within us - my own translation).  Significantly, while much media is blaming disenfranchised immigrants, the poor, and their allies for the recent violence, the government's November 2012 report noted its title was justified by the significant threat posed to vulnerable groups by the 'many different forms of everyday racism' which ordinary Swedes can embrace, the xenophobia many harbor.  Tellingly, the report's summary ends by observing that Swedes "must begin with ourselves" (måste börja med oss själva) in addressing this.

The fuse gets lit

Unfortunately, while there's long been much discussion about discrimination and prejudice, there's a Swedish expression - 'mycket snack och lite verkstad'.  It means 'a lot of talk and little action'.  However, if a powder keg sits around long enough, sooner or later the fuse gets lit.

The start of the 2011 riots in Paris' suburbs, the Brixton riots in the UK, and virtually all of the US's major strife dating from the 1960s, do have one factor in common - perceived police wrongdoing triggered the unrest.  In Sweden, the riots began following the police killing of a man in his late sixties, reports initially suggesting he had a machete, a woman hostage, and had threatened police.  Swedish papers screamed "Machetemannen" (The Machete Man), the implications being obvious, printing that the fellow had died in hospital, attempts to save him failing...but, it appears this isn't quite right.

As noted in an article by the UK's Independent, 'Fire and fury in Sweden as riots spread':  "Two weeks ago, news emerged of the death of a 68 year old Portuguese immigrant man, who had been shot in his Husby apartment by police, then taken to hospital, where he died. He had taken a woman hostage, so the story went, and had been waving a machete at police. But Megafonen, a group that campaigns for social change in the suburbs, published pictures of a body bag being removed from the man's apartment, and driven away in a car. Not an ambulance, a car.  It would later emerge that the so-called hostage was in fact the dead man's wife of 30 years, and according to his brother-in-law, he had been waving a kitchen knife, not a machete, to ward off a gang of youths who had been harassing him and his wife."

To my eyes, the rioting seems to have subsided following news that the officer responsible for the man's death is "suspected of manslaughter", The Local (Sweden's major English-language media site) headlining 'Stockholm cop probed over pre-riot killing'.  But, key here is understanding how the killing was seen, how some viewed it, including the activist group 'Megafonen'.

According to an excerpt on the police action from Megafonen's website..." The police are in our areas to protect the political and economic elite: scare us, disciplining us ... The police teach us in practice what the school teaches in theory: that as poor workers and non-whites you are inferior and of less worth, in Sweden and around the world." (translated)  Such feelings of oppression are palpable, and upon reaching Lappalainen after the riots began, one of the first things he observed was: "The underclass has reacted."

Later, in an email to this journalist, Lappalainen pointedly noted: "This government has exacerbated the pattern set by previous governments. An underclass has been created that is growing while its hope in the future is increasingly undermined. They have been subjected to disempowerment and disregard combined with public officials who have little to say other than that a job, any job is the key to integration. Blaming the victim is the rule even among the so-called established parties...they are unwilling to deal with equal rights and opportunities/anti-discrimination as the key element in regards to inclusion, integration, democracy and human rights."  As to what a sea-change on such issues might mean, he noted that the OECD highlighted Canada as the most successful country at integrating immigrants into a nation's workforce, emphasizing that the Canadians "have equality as the key to immigration".

In contrast, I interviewed one of Swedish Prime Minister Fredrik Reinfeldt's press secretaries, Markus Friberg, on 24 May, the rioting yet spreading at that time. What had started in the Stockholm suburb of Husby was reported far more widely by the week's end, media noting incidents in towns such as Uppsala, Linköping, Örebro, Malmö, and even in Dalarna.  I raised the issue of 'structural discrimination' with Friberg.

"It's not been proven that we have structural forms of discrimination and racism", he emphasized; though, readily acknowledging that, like most countries, Sweden did have some questions of discrimination and racism to address.  Of course, the reports cited above speak for themselves, but, as I see things, one of the key issues they point to is a cultural one, one which the US confronted following its riots of the 1960s, the economic hardship discrimination brought being part of why such rioting occurred.

"An underclass has been created that is growing while its hope in the future is increasingly undermined", is what civil servant Lappalainen sees, but, the Government is of a different vision.

According to Friberg, this Government has "not been cutting on welfare since we took office in 2006.  We improved the resources for both schools and to combat unemployment, and for health services", further noting other "reforms" with which the Government had sought improvement.  However, in May 2012 a parliamentary report on Sweden's social welfare made news.

'Sweden drifting from 'Swedish model': report', is what The Local headlined, the article's summary reading: "Sweden's historically generous social safety net isn't as robust as it once was, according to a new report, which reveals Sweden has fallen below the average for many other developed countries when it comes to various types of social insurance."  The article goes on to note that an author of the document, Joakim Palme (a son of late Prime Minister Olof Palme), observed "that Sweden was in the process of abandoning the famed 'Swedish model'".  And, a member of the Parliament's Finance Committee had a few words for this journalist as well.

"If you look at the stastistics, there are more children in the pre-school groups; it's less teachers in the schools than before, and it's less employment -- nurses and so on - in the elderly care", MP Ulla Andersson of the Left Party charged.  Andersson then pointedly added, "it's less, less, less.  Now 26 billion (krona) less to people who have been sick...they have destroyed the insurance for the sick, for the unemployed, to pay for tax deductions".

A culture of discrimination

In 1967, US President Lyndon Johnson appointed the Kerner Commission to look into the causes of  the rioting which then plagued America, unrest which the 1960s media termed 'race riots', with some media having currently used the same term to describe Sweden's upheaval.  According to Wikipedia, the Commission's findings "suggested that one main cause of urban violence was white racism and suggested that white America bore much of the responsibility for black rioting and rebellion. It called to create new jobs, construct new housing, and put a stop to de facto segregation in order to wipe out the destructive ghetto environment."  Similar findings of structural discrimination and racism came out of inquiries into the UK's Brixton riots and the turmoil following the racist murder of Stephen Lawrence, including that the police force was "institutionally racist".

On 1 June a group of ten academics called for a commission to investigate Sweden's unrest, the article they published being widely reported on national news. Unfortunately, those I have since spoken with here feel the Government isn't yet ready for such a step.  In the US, it took two years of rioting before the Kerner Commission was appointed.

While the rioting was yet ongoing I spoke with a local, Dalarna leader from the region's Left Party - Leif Lindström.  We discussed the then ongoing and expanding unrest, with my soon asking him what he would advise the government here, if he could.  He thought for several moments, then replied: "Save the country...with justice."

At the moment, all I can think of is a quote, one from the late US civil rights leader Martin Luther King: "Morality cannot be legislated, but behavior can be regulated.  Judicial decrees may not change the heart, but they can restrain the heartless."