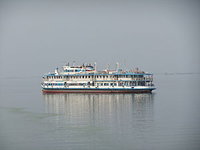 The trial on the case of the tragic sinking of Bulgaria ship has recently started in the Republic of Tatarstan. The courthouse can hardly house all members of the process, including witnesses, victims and relatives of those killed - more than a thousand people in total. On the first day of the meeting, at the request of the defendants, the session was postponed till May 27. The proceedings promise to take a lot of time.

Investigators say that it was extremely hard for them to investigate the causes of the tragedy.

"A huge amount of work has been done. For example, we have conducted more than a thousand interrogations," an official with the investigative committee said. "In addition, investigators have conducted about 30 searches and more than 200 examinations. The most difficult one of them was a complex navigation, engineering and technical forensic examination, which was conducted from August 2011 till March 2012. The examination identified the circle of suspects. As a result of this rigorous work, investigators have established a causal link between the unlawful acts of the accused and the deaths of more than a hundred people."

Assistant to the captain Ramil Khametov, subtenant of the Bulgaria, Svetlana Inyakina, expert of the Russian River Register, Yakov Ivashov, and two employees of Rostransnadzora, Vladislav Semyonov and Irek Timergazeev, are in the dock.

Initially, the case was supposed to be heard in the Kama-Ustinsky Court of Tatarstan, where the tragedy occurred. However, at the request of victims' relatives, the territorial jurisdiction has been changed. The majority of defendants on the part of victims reside in Kazan, and it would be inconvenient for them to travel to a remote location to be able to take part in the proceedings.

The court will consider the main argument of the investigation about the sinking of the ship. Investigators believe that the ship did not have the right to be put to sea, especially with so many passengers on board. The examinations conducted confirmed that the ship had been worn out, and the crew violated the rules of navigation. The sunken ship was produced in 1955. Despite the age, the vessel was not considered dilapidated, and it was allowed to navigation.

"Most likely, a lot more lives could have been saved, if it wasn't for the captains of the Arbat cargo ship and the Dunaisky 66 tugboat. They passed by the vessel in distress, and did not help anyone," a spokesperson for the Investigative Committee said. "According to survivors, it broke their will, many had the feeling that no one needed them. The two captains have already been subjected to adequate punishment."

The criminal case counts 100 volumes, the number of people affected reaches 200. If we add witnesses and defendants, then the number of participants reached about 1,000. During the preliminary investigation, most defendants pleaded not guilty.

After the sinking of the Bulgaria boat, countless inspections of riverboats were launched across the nation. It turned out that a large number of pleasure boats have serious technical flaws, morally and physically obsolete. The commissions that were examining ships throughout the country concluded over and over again: many of the ships that transport tourists on the rivers of Russia should have been decommissioned a long time ago. However, the desire of businessmen to save money, only made them to conduct light repairs and turn a blind eye on serious technical problems. Experts say that the tragedy of the Bulgaria could happen anywhere. The fleet of ships that were produced in the middle of the last century is not news to any region.

The court hearings on the case of the sunken ship will take a lot of time. The court will have to do tremendous job to come to a well-balanced and reasoned decision. However, many say that the sentence for the accused is unlikely to be lenient. Law enforcement and police officers believe that people may lynch defendants right in the courtroom, so the defendants were put in a cell.

On 10 July 2011, the Bulgaria sank in the Kuybyshev Reservoir of the Volga River, Tatarstan, Russia, with 201passengers and crew aboard when sailing from the town of Bolgar to the regional capital, Kazan. The catastrophe led to 122 confirmed deaths (bodies recovered and identified).

The sinking of Bulgaria is the largest Russian ship disaster since 1986 when the SS Admiral Nakhimov crashed into a cargo ship and 423 people died.

Survivors say that during the cruise, Bulgaria encountered stormy weather, and listed sharply to starboard. This was apparently compounded by the captain trying to turn the boat around, and soon water rushed into the vessel through portholes that had been opened because the ship had no air conditioning. According to a survivor, the sinking came without warning, and the vessel "listed to starboard ... and capsized and sank.The boat sank within minutes, plunging nearly 20 metres (66 ft) to the river bed. At least 50 children were believed to be among the dead.

Seventy-nine people (56 passengers and 23 crew members) were reported to have survived the sinking. Of those, 76 were rescued by the cruise ship Arabella, a few others were saved by other boats, and one survivor managed to swim to the shore. At the time of the incident, Bulgaria passenger's count is estimated to have been at 201, though she was only rated to carry 120.