Hunting Israeli bombers attacked on two occasions causing casualties in areas in the Palestinian town of Khan Younis, in violation of the agreement in force since the mass bombings of last November. The attacks follow several days of violations by army tanks in between the agreement limits that are in force between the Islamist organization Hamas, and Israel. 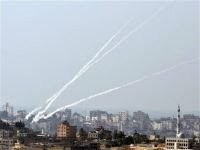 Another air-ground rocket bombardment of American manufacture was recorded near the town of Rafah, bordering on the Sinai Peninsula, Egyptian territory.

One death was confirmed and several injuries.

This is the second time this month that Israeli aircraft attacked civilian areas in Gaza,  the most serious violations of the truce negotiated last November between Israeli and Palestinian representatives through the mediation by the Government of Egypt to cease weeks of mass bombings of Gaza in which more  than 180 people died, half of them women and children, and over two thousand were injured.

The increase in tension in Gaza causes fear of a resumption of attacks against civilian areas that last November prompted harsh criticism from governments in the region and the Arab League against the complacency of the United States and its Atlantic allies with the powerful Israeli machinery of aggression against Palestinian areas.

The resumption of attacks led to statements yesterday by Palestinian President Mahmoud Abbas, in which he announced the start of consultations to form a national unity government, a step prior to the convening of municipal, legislative and presidential elections as part of the efforts for reconciliation between Hamas and Al Fatah, the two main nationalist resistance entities.

Hamas, the group that rules Gaza, condemned the Israeli attack but also signalled that it is eager to preserve the truce.

"We call on Egypt to put pressure on the Israeli occupation to stop these crimes and to force them to honour the truce and stop the aggression," said Hamas spokesman Fawzi Barhoum.

The Israeli internal security service, Shin Bet, has said that during 2012 no Israelis were killed in the West Bank.

Nine Palestinians have been killed by Israeli forces in the West Bank since the beginning of the year in various incidents, mainly in clashes that have risen sharply in recent months.