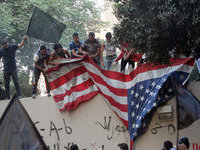 Waging war at home or abroad requires enemies. America creates them when none exist. Imperial strategy demands them. Post-9/11, Muslims were targeted for political advantage. Post-Boston bombings, America's war on Islam continues. Muslims are "war on terror" scapegoats. Washington's Middle East, North Africa and Central Asia wars rage. It's the wrong time to be Muslims in America. They're persecuted for their faith and ethnicity. At times it's for their activism, prominence, and/or charity.

They're dehumanized, spied on, set up as patsies, hunted down, rounded up, held in detention, kept in isolation, denied bail, restricted in their right to counsel, tried on secret evidence, convicted on bogus charges, given long sentences, and treated harshly as political prisoners.

The term "Islamofascism" was popularized. Some call it Islamic radicalism or jihadism. The New Oxford American Dictionary calls it "a controversial term equating some modern Islamic movements with the European fascist movements of the early twentieth century."

The Urban Dictionary says it "refers to the notion that Islam is not so much a religion as it is a political ideology that in many ways resembles 'fascism.' "

"An Islamofascist can either be an Islamic fundamentalist, or someone who uses violence or bullying tactics to impose Islamic principles on others...."

It's used to describe groups like Al Qaeda. In 2008, Fairness & Accuracy in Reporting (FAIR) headlined "The Dirty Dozen - Who's who among America's leading Islamophobes."

Michael Savage hosts "The Savage Nation." It's a nationally syndicated radio talk show. He relentlessly uses hateful language. He once endorsed killing a hundred million Muslims. He did so on air. Pat Robertson calls Islam violent and irrational. It's "not a religion," he says. It's a "worldwide political movement." It's "meant to subjugate all people under Islamic law." It's a "bloody, brutal type of religion."

King chairs the House Homeland Security Committee. He's also an Intelligence Committee member. He wants more surveillance. "It keeps us ahead of the terrorists who are constantly trying to kill us," he said. Big Brother no longer is fiction. Total surveillance is possible. New York, Chicago, Los Angeles, Washington, Boston, and other cities use growing numbers of video cameras.

They monitor streets, commercial areas, airports, highways, public and private transportation, shopping malls, government and  business buildings, as well as other places where people congregate, work, reside, recreate, or inhabit for any reason. King and others want more. Drone surveillance may be expedited. Legislation authorized eye in the sky spying. Civil libertarians call all forms of surveillance an unregulated privacy threat.

In his April 20 weekly address, Obama suggested perhaps what's coming. He called Monday's incident "an act of terror....But in the days since....Americans refuse to be terrorized."

"In the days to come, we will remain vigilant as a nation." Expect the worst to follow.

Both brothers were set up as patsies. One's dead. The other's seriously wounded. He remains hospitalized. He's at Boston's Beth Israel Deaconess Medical Center. He's under heavy guard. He'll be interrogated when able to respond. He won't be read his Miranda rights. On April 20, the ACLU headlined a "Statement on Miranda Rights of Boston Bombings Suspect," saying:

"The American Civil Liberties Union reacted to the apprehension of the suspect in the Boston Marathon bombing and statements from federal officials that he would be questioned without being read his Miranda rights."

"Every criminal defendant is entitled to be read Miranda rights. The public safety exception should be read narrowly. It applies only when there is a continued threat to public safety and is not an open-ended exception to the Miranda rule."

"Additionally, every criminal defendant has a right to be brought before a judge and to have access to counsel. We must not waver from our tried-and-true justice system, even in the most difficult of times. Denial of rights is un-American and will only make it harder to obtain fair convictions."

"The Miranda warnings were put in place because police officers were beating and torturing 'confessions' out of people who hadn't even been formally accused of a crime."

"We cannot afford to repeat our mistakes. If officials require suspects to incriminate themselves, they are making fair trials and due process merely option and not a requirement. To venture down that road again will make law enforcement accountable to no one."

"Like Obama's expanded killing program and his perpetuation of indefinite detention without trial at Guantanamo, this is yet another erosion of the Constitution to lay directly at the President's feet."

"Obama's Justice Department unilaterally expanded the 'public safety exception' to Miranda in 2010 beyond anything the Supreme Court ever authorized."

"Each time the administration use this exception, it stretches wider and longer. However horrific the crime, continuing to erode constitutional rights invites continued abuse by law enforcement, and walks us down a dangerous path that becomes nearly impossible to reverse."

Media scoundrels straightaway convicted both brothers. They did so in the court of public opinion. Misreporting continues. FAIR's Peter Hart calls it a "rush to misjudgment," saying:

"We've seen reporting and commentary that talked about the Muslim or jihadist character of the bombs themselves: pressure cookers, ball bearings or nails used."

"These are things that are not unique to al-Qaeda or al-Qaeda-inspired terror attacks."

"We saw references to the Times Square bombing, trying to put this in the context of Islamic terror or previous instances of what the media like to refer to as Islamic terror."

"We even saw references to the fact that two bombs were there. It must have been a follow-up attack trying to hit the rescue workers when they show up - again, a Middle Eastern trait, we're told."

"This is actually what the United States government has done in places like Iraq and in drone strikes in Pakistan."

"So we have seen this rush to characterize this bombing, without necessarily saying precisely that we know who the perpetrators are, but to put it in this context."

"And I think that creates a climate of fear and suspicion, particularly directed toward certain communities."

"We read headlines, you know, block letters across the front page of the USA Today, the day afterwards, "Terror Has Returned."

"This idea that the United States has not seen a terrorist attack since 9/11. This is a unique event right now."

Glenn Beck's web site (The Blaze) got it wrong saying a Saudi national student was "absolutely involved." He called him a "dirt bag, possibly the ringleader."

Fox News host Sean Hannity claimed he previously was "involved with a terrorist or terror activity."

Media Matters said "too many players opted to just make stuff up. Prompting witch hunts, they cast innocents as would-be killers and then couldn't be bothered with apologies." Murdoch's New York Post "seemed committed to getting as many stories wrong about the Boston attack as possible." Before an arrest was made, CNN's breaking news headlined "Sources: Arrest made in bombings case." Reporter John King erroneously called him "dark-skinned.

"Our concern is that CNN used an overly broad, unhelpful and potentially racially inflammatory categorization to describe the potential suspect. History teaches us that too often people of color are unfairly targeted in the aftermath of acts of terrorism."

Official reports were accepted as fact. The Tsarnaev brothers were blamed. A Chechen "extremist," "Al Qaeda" or other "foreign group" connection was suggested.

"Much as some in Washington might wish it, the war against terrorism is not over....The Tszrnaevs....may have intended more mayhem: They were reportedly carrying more bombs when they were cornered Thursday."

Note: Media misreporting said at least older brother Tamerlan wore an explosives vest. Photos of his body showed him riddled with bullets and shrapnel head to toe. All limbs were intact. He wasn't blown to pieces.

"....These have been scary days. (It was) chilling to see how successfully the suspects, Chechen Muslim immigrants, were - not just in allegedly killing people, but in instilling widespread fear, especially in the Northeast."

"The week served as a painful reminder that this nation remains in an ongoing fight against terror - and that the homeland is still vulnerable."

"The war on terror isn't over. Alas, far from it."

Boston Globe editors headlined "Boston after the bombings: a show of character," saying:

"(L)aw-enforcement officials and political leaders....put aside turf wars and expressions of egotism to focus on the killers...."

"....Boston's character needs no further validation. The city is strong, and getting stronger."

"....Boston bombing suspects (may) have had no motivation more complex than joyful cruelty."

"This level of preparation, though, suggests that they had some motive more sophisticated than merely marauding through the lives of innocents."

Possible motivations of both brothers aren't yet known. "Yet, with at least one brother talking of Chechen nationalism on the Internet, their reported involvement in the marathon attack throws a spotlight on one of the darkest corners of nationalist and Islamic militancy...."

"Whether the Boston bombing was tied to it is still unclear, but a generation of young Chechen men have never known a peaceful homeland (and have had) difficulties finding a place abroad."

Author`s name Stephen Lendman
*
18:54
Ukrainian soldier uses chainsaw and fire to release US howitzer from ice trap
18:30
Onet: Ukraine will lose in six months due to shell shortage
14:17
Russians buy more than 50 tons of gold in 2022
13:34
USA's plan to give 20 percent of Ukraine for peace hoax
19:57
Russia will use all of its military potential to counter Western arms supplies to Kyiv
18:34
Biden changing strategy on Ukraine to reach diplomatic solution with Russia
17:36
Consequences of NATO's possible supplies of fighter jets to Ukraine get clear
15:16
Ukrainian forces suffer heavy losses while trying to cut across Dnieper
13:35
USA's next step is to suppress European economies
12:52
Victoria Nuland turns herself in about Nord Stream blasts
Medvedev: Ukraine as a state to be devastated, go bankrupt and be turned into colony