Belgrade and Pristina - No Compromise

Negotiations between Belgrade and Pristina on the normalization of the relations were unsuccessful. Serbia insisted on broad autonomy of the Serbian communities with their own executive branch, courts, and police. Hashim Thaci rejected the idea. The Serbian leadership is on the verge of a legal rejection of the territorial integrity of the country for the sake of getting a date for the start of negotiations on the EU membership. 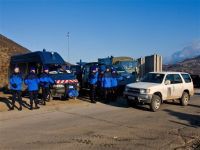 Ivica Dacic and Hashim Thaci ,Prime Ministers of Serbia and partially recognized Republic of Kosovo, held talks in Brussels with the mediation of Catherine Ashton, the EU High Representative for Foreign Affairs and Security Policy. Even 13 hours of serious continuous negotiations of the eighth round did not result in a compromise. Ashton said that her role as a mediator was over, which means that the date of the beginning of the accession negotiations of Serbia to the EU will be postponed for one year.

Belgrade failed to fulfill its main condition - "normalize relations" with Kosovo. According to Serbia, the autonomous province of Kosovo and Metohija (partially recognized Republic of Kosovo), where the north is home to about 130,000 Serbs, is a part of Serbia under the protection of the UN. This position is consistent with UN Security Council Resolution 1244 of 1999, the only document to date dealing with the legal status of Kosovo.

In fact, the Serb-populated areas (community Kosovska Mitrovica - north of the Ibar River, Leposavic, Zvecan and Zubin Potok) are actually controlled from Belgrade that funds local authorities. However, in denying the independence of Kosovo and Metohija, Belgrade has been losing its positions one after another, approaching the implementation of the illegitimate Ahtisaari plan. Does it seem absurd to demand creation of autonomy within the autonomy? No, it does not, if we consider that subconsciously the Serbian leadership has accepted the independence of the region, and has to only find a way to explain this to its people without losing face.

Pristina understands it very well, and sticks to the position of the territorial integrity of the country in accordance with its Constitution. Thaci will never agree to the creation of the so-called "Association of Serbian communities" in Northern Kosovo, which will be the basis for the subsequent separation. He agreed to autonomy, but after the dissolution of "parallel structures of power" in north Kosovo and the signing of a peace treaty, in which Serbia would apologize for all the crimes of the 1990s and agree to pay reparations.

Deputy Director for the Office for Kosovo and Metohija Krstimir Pantic told B92 TV channel that the failure in Brussels was the expected outcome, because Pristina was not ready to compromise, and the EU and the U.S. did not want to pressure it. Another Serbian official, Director of the Office of the Media Relations Milivoje Mihajlovic also blames the EU and the U.S.

He stated that they would be responsible for the failure of the dialogue. He said that he talked to other journalists, Albanians from Kosovo. Most of them told him that they would have given in, but they are not allowed to do so by the Americans. Indeed, the meeting in Brussels, as well as all others, in direct contact with Washington was attended by Philip Reeker, a U.S. diplomat in charge of the Western Balkans in the State Department.

The State Department Rules of Conduct in the Balkans were presented by the American politician James George Jatras, head of the American Council for Kosovo. First, all claims and interests of the Serbs always have to be nulled, and second, the Muslims are always right and their claims and interests in any case will be given the green light. In practice, this translates into an unspoken rule - refusal of further partitioning of Kosovo. This is understandable, because it is very dangerous to develop Kosovo's model of statehood decay any further.

Kosovo Serbs are against the compromise (on the recognition of autonomy in the autonomy) favored by Belgrade. They are demanding the return of the negotiation process under the UN framework, respect for Resolution 1244, and think about the Serbs who live in enclaves in other parts of Kosovo. They declare that they will refuse to carry out an agreement between Belgrade and Pristina if their interests are not considered. This is the approach encouraged by Russia.

Serbia forgot about its ally Russia, and is acting against the agreement with this country. "The format of negotiations between Belgrade and Pristina was agreed upon by the previous government of Serbia and the European Union got the role of the mediator, with which we (Russia) agreed. Then the EU has decided to involve the U.S. representative (Philip Ricker) as an observer, while we have not been asked to join, so Serbia found itself in a very unfavorable and uncomfortable situation," said the Russian Ambassador to Serbia Alexander Chepurin in an interview with TV channel "Most." The Ambassador emphasized that the results of such negotiations format would not be great.

However, the Serbian leadership in the pursuit of an illusory dream of being accepted into the EU is on the verge of changing the Constitution. Why is it illusory? Because Serbia is considered under different rules (Cyprus was admitted to the EU without settlement of its relations with Turkey in the north). When it gives up the Kosovo Serbs, and thus Resolution 1244, another reason for ignoring it will be proposed, for example, position of the Albanian enclave Presevo Valley on its territory.

The Serbian government explains its position by saying that becoming a member of the EU, the country will receive financial assistance and the right of access to new technologies, which would have a great impact on the economic situation in the country. They say that today unemployment in some areas reaches 26 percent and that the economy is in recession (2 percent in 2012), that there is budget deficit and low per capita income. But the EU, represented by Germany, works with the countries like Serbia on the principle of colonial exploitation. A striking example is Slovenia that was one of the most developed republics of Yugoslavia, and is now a peripheral economy with the indicators of Greece, Portugal and Spain. Hopes for the economic power of the EU are another illusion of the Serbian leadership.