The Secretary General of the United Nations Organization (UN), Ban Ki-moon, on Wednesday again recognized Iran's right to the peaceful use of nuclear energy. 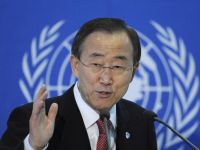 During a meeting held with the Iranian Foreign Minister, Ali Akbar Salehi, outside the V Forum of the Alliance of Civilizations of the United Nations (UNAOC, for its acronym in English), held in Vienna, capital of Austria, the leader of the international organization expressed optimism about the Tehran talks with the Group 5 +1 (USA., the UK, France, Russia and China, plus Germany) and called for the acceleration of bilateral dialogues .

Regarding the situation in Syria, Ban Ki-moon was thankful for Iran's support to the Special Envoy of the UN and the Arab League (AL) to Syria, Lakhdar Brahimi, and welcomed political dialogues, being willing to engage opposition groups and members of the Damascus government.

Salehi, for his part, stressed that Tehran is ready to eliminate all concerns that exist about the Iranian nuclear program and stressed that the recognition of the rights of the Persian country, by the West, is very important.

Also, the Iranian Foreign Minister stressed that the only solution to the Syrian conflict is conducting a national dialogue and he said the Persian country is ready to provide the assistance that is necessary to prevent continued bloodshed in the Arab country.

Finally, Salehi said that the establishment of security and stability in the region is very important for the Iranian people, and in this sense, the Islamic Republic of Iran respects the territorial integrity of all countries.