Saharawis: Where is the international community?

The Spanish Government may have forgotten its obligations when it literally walked out of its African colony, Western Sahara, in 1975, allowing the Moroccan Green March to walk in and annex the territory and its people. The Spanish people have not forgotten their responsibility and demonstrate in favour of their Saharawi brothers and sisters. 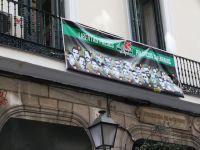 Thursday February 21, 18.00, in front of Spain's Foreign Relations Ministry in Plaza de la Provincia, a massive demonstration is called by activists fighting for the human rights of the Sahawari population, whose members can be given life imprisonment or jail terms of 20 to 30 years in horrific conditions for defending their right to freedom and self-determination. Where is the international community on this issue?

A Moroccan military tribunal sentences 24 Saharawi freedom fighters and human rights activists to 8 life sentences and other sentences between 2 and 30 years in jail in November 2010 after Moroccan security forces stormed the camp of El Aaiún in Western Sahara, whose status under international law is a territory pending a referendum on integration into Morocco, autonomy or independence, denied by the occupying power, Morocco.