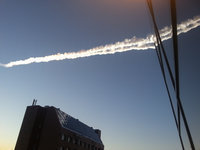 The 45-meter-long asteroid weighing 130,000 tons, which will approach the Earth tonight, February 15th, is surrounded with a "cloud" of rocky rubble. One of them fell this morning near Chelyabinsk. Several other meteorites fell on Friday afternoon in Kazakhstan. Many Russians say that today's events remind them of the film "Armageddon."

How serious is this danger to our planet? Pravda.Ru consulted an observer of Cosmonautics News magazine, Igor Lisov.

"When is the asteroid going to reach the closest point to Earth?

"It will happen at approximately 23.40 Moscow time.

"Has anything changed in connection with the Chelyabinsk incident in terms of the probability of a collision with our planet?"

"No, nothing has changed, and nothing could change about that. Even if we assume that these bodies belong to one and the same cloud, the rock of 2-3 meters in diameter that entered atmosphere above ​​Chelyabinsk and the main 45-meter- long asteroid are flying all by themselves and do not affect each other."

"No. The asteroid will fly by. But some things come unexpectedly. They can come at any time simply because we can not see them. Celestial bodies of about 50 meters can usually be detected in advance, although there are no guarantees. Smaller bodies can hardly be detected. Even if we can detect a large celestial body that is going to fall down on Earth, we still have nothing to destroy it with."

As a result of air and ground reconnaissance in the Chelyabinsk, Sverdlovsk, Tyumen and Kurgan regions, there were 45 municipal districts inspected, as well as 102 urban districts and 179 municipalities. The works involved 20,828 people and 3,982 units of hardware.

The inspection of the territories showed that the radiation level remains normal. All systems and facilities of energy, communications and transport fields, as well as essential services operate normally.