Israel, Iran and Turkey use Syria as whipping boy

Israel has not officially confirmed the fact of an air raid on a research center in Syria. Washington has not provided an official confirmation to this either. The UN Security Council has not condemned the attack. Syria has become a "whipping boy", whom Iran and Israel use to flex their muscles to each other at the time when Turkey tries to establish itself in its pan-Turkism. 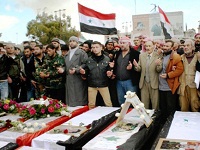 According to sources at the Pentagon that refer to The Times, the night raid on January 30 was sanctioned by the U.S. in order to prevent "the transfer of arms from the regime of Bashar al-Assad to his ally - Lebanon - and then to Shiite organization Hezbollah," which controls the Gaza Strip.

It supposedly goes about the convoy of Russian anti-aircraft missiles SA-17. "We must do everything possible not to let such weapons as the SA-17, as well as chemical and biological weapons get into terrorists' hands," U.S. Secretary of Defense Leon Panetta told France Presse. Analysts believe that his words indirectly confirm that it was the Pentagon that gave a green light to the attack. However, the Americans have not confirmed that officially, of course.

Syria has denied the information about the convoy and called the attack a "terrorist act" and "revolting aggression", the goal of which was to discredit the recent achievements of the Syrian army. Syrian Defense Minister General Jassem al-Fahd Freij explained that the recent victories of the army of Bashar Assad over the opposition forced Israel to rush to help them. Al Freij noted that the Syrian opposition had been trying to storm the research center in Jamraya for a long time, although to no avail. In the end, Israel was forced to act independently.

Indeed, it is strange to hear the allegations about the convoy, which did not exist. At least, there were no pictures provided to substantiate the claim.

In addition, Israel's border with Syria has been quiet during the past 40 years - why provoking its government to strike back? One shall assume that the matter is not about Assad. Israel has always been able to negotiate everything with Assad' secular regime. Moreover, the collapse of this regime may lead to much more serious consequences for Israel in the face of Salafi threat. The matter is about a stronger factor: Iran and Hezbollah, which Iran supports. Many analysts agree that through the attack in Syria, Israel wanted to make it clear to Mahmoud Ahmadinejad, that the next attack may target either Hezbollah camps in Lebanon or Iran.

Iran has reacted immediately. Iranian Deputy Foreign Minister Hossein Amir Abdollahian said that the bombing may lead to "serious consequences" for Israel. Iranian parliament deputy and member of the Supreme National Security Council, Hassan Mohammed Asperi said: "Syria has a full right to reciprocal action against Israel, which committed an illegal operation against the security of this country." The commander of Iran's Guards Corps, General Mohammad Ali Jafari said that "resistance and revenge was the only way" to deal with Israel (quoting IRNA). Interestingly, the official Damascus said nothing about "revenge." Quite on the contrary, Syrian officials said that they would not answer.

The West started to speculate about a possible terrorist attack, similar to the attack in the Bulgarian city of Burgas, where seven Israeli tourists were killed. This brings up a question of why Syria would need such charges, if they provoke the West to intervene?

It appears that on top of all the troubles, the country has become a hostage to a showdown between Israel and Iran. The latter set Syria up in their attempts to "warn" each other. Israel, convinced that all its troubles come from Hezbollah, which is funded by Iran, has vowed not to let Iran build a nuclear bomb. Tel Aviv constantly threatens with a pre-emptive strike, which, however, will not destroy Iran's nuclear facilities hidden in the mountains. Iran threatens to respond both directly and indirectly: to arrange an attack by Hezbollah troops against Israel.

In Israel, there is little doubt about the fact that a direct confrontation between Israel and Iran will take place. It is only a question of time. Israeli voters chose this path as they re-elected Benjamin Netanyahu at the recent parliamentary elections. The Israelis hope that Netanyahu will not fight alone, and that Obama would help. However, it does not seem that there is a sign of this assistance. Nabil Mikhail, a professor at George Washington University, told Press TV that Obama had been informed about the operation in Syria. Nevertheless, neither the State Department, nor the White House have said anything on the subject yet. "I think that Obama has not attached special importance to the Israeli attack on Syria. He may have not even thought about it much," the professor concluded. Indeed, Obama is much more concerned about the threat of default, unemployment and rampant violence in the United States.

Turkey suddenly used Israel's raid on Syria for its own purposes. First of all, Turkey intended to humiliate the Syrian army. "Why didn't Assad even try to take any action against Israel? Zionist planes fly over the presidential palace in Damascus every now and then. Wasn't this army created to protect the freedom and independence of Syria?" Turkish newspaper Hjurriet quoted Foreign Minister Ahmet Ahmet Davutoglu as saying.

Afterwards, the Minister suggested that the attack could be plotted by Israel and the Assad regime to kill two birds with one stone. "Turkey will not tolerate Israel's attack on any Muslim country," said Davutoglu. In addition, Turkey, unlike Israel, is a member of NATO and feels much more confident being protected by Patriot missiles. From this point of view, no matter what turn the situation in Syria may take, the Arab world has prepared an image of an enemy for Israel.

The Syrian regime is the only secular regime in the Arab world. For various reasons, the regime annoying everyone, including its own allies. It annoys even the Russian administration because the regime continues to resist, making Russia's communication with the West uncomfortable.