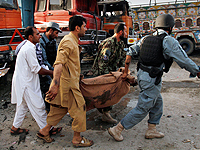 Since Dr. Tahirul Qadri last month landed in Pakistan and promised us a revolution much guessing has been going on about who might have sent him, and what would he mean when talking about a revolution. The established parties in the first place the ruling PPP started giving an impression as if they were getting cold feet thinking how much would the newcomer be able to disturb their game plans so close to the end of the of the election period and before the upcoming elections under the allegedly arranged election bout called Muk-Muka.

There were quite some people in the country who were looking forward to a savior, for change that the repeated pronunciation of the word 'revolution' was suggesting. Since Imran Khan has lost much of his appeal due to the self contradictions in his actions such as allowing so-called 'electables'heavy weights from other political parties into the PTI fold. while kicking out rudely those party workers who had been with him for so many years and who were now sidelined and for the lack of vision and plan of course. PTI hope was dwindling with those who want real change also because of his taking the wrong foot forward and making up with so many used cartridges. So Dr. Qadri was taking the place of the savior inspite of many black spots in his previous record. Impression was created by adopting scientific approach by first pumping in millions of rupies on advertisement campaign to make hostage of the nation by buying the prime on electronic media to make the viewers believe as if he was literally descending from heaven, landing directly in Pakistan and bringing the much awaited revolution for change. But the events of the last couple of days have brought a rough awakening.

What we have seen instead of a revolution last week was a Grand Tamasha of all sorts in which Dr. Qadri and the ruling coalition were playing together. The man who promised to 'save the state but do away with politics' by launching a million march to siege Islamabad if his 4 points reform demand were not accepted he will force the parliament and government to step down. Reports on electronic media have now revealed that to achieve this goal he first purchased a couple of thousand poor people by paying them three to five thousand rupies per day each, providing transport and serving them three free meals a day and then settled with the very crooks he had come to oust for an 'agreement' the main points of which are repeating what is anyway, the way towards next elections, which seems to be drifting by stress on the only but weak point that there should be one month more required instead of 60 days provided in the constitution to hold general elections for scrutiny time to check the 'cleanliness' of the candidates.

Well, the first reactions to this we have already seen: the crooks are now sending their sons into the election campaigns who will then promote the agendas of their fathers and of their family clans. The next parliament is going to be a baby-faced one with Bilawal Bhutto and the sons of the current governor of Punjab who just joined the PPP and PML (N) and may be others following the same line. But may be we can also not put too much blame on the sleazy Dr. Qadri; he might have had thought that change was what Pakistan needed having lived out of the country and out of touch with Pakistani realties. When he arrived he had to see that nobody would join him if not for the money that he had brought in and was doling out freely. All established parties including the MQM who used to vow they want to fight feudalism but unable to explain why are they in coalition with the feudal lords for the last five years?

And Imran Khan the tsunami changer who alongwith all others decided in one voice that they are so much happy with our democracy hand in gloves with feudals that in no case they want to see it derailed. This experience brings us back to square one. That is: while the masses are complaining, but nobody including the rulers and the opposition and the masses themselves wants real change because that would hurt, it would upset the power structure and would make access to power incalculable. If for nothing else the whole Qadri drama was good to bring this point out clearly: None of the Pakistani party wants revolution and real change.

One wonders if this outcome of the whole matter was in the intention of those who were planning and financing Dr. Qadri and his 'revolution'. Was the real purpose to topple the government or to change the system? Then the plan has failed.  But may be the plan was exactly what we have now: The old and abused constitution in place, a weak but defiant government in place who are vowing to hold the elections because they are quite sure that they can manipulate the outcome according to their liking. A compromising election commission is there in place, a weak interim government may be for a long duration will follow instead of caretakers to hold elections within 60 days if the parliament is desolved on completion of its tenure.

With such an interim government in place with an ulterior object, that is a toothless lion and without a parliament there is a possibility that the friends of Dr. Qadri who spent their money so lavishly on him and sent him for this mission may like the idea of a toothless government in 2013 and may be dragging on until 2014 until which time those friends will have to withdraw from Afghanistan which is done best and cheapest through Pakistan if not this useless national security committee and the spineless parliament had put restrictions on them. So, in the absence of an elected government, and parliament though things could be finished much easier for the pupiteer for whom our politicians are playing the musical chair in unison. God grant our leaders, ulema's and the nation the serenity to accept the right course of action and the courage to change the things we can, and wisdom to know the difference. Long live Pakistan.