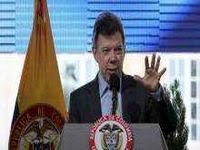 Colombian President, Juan Manuel Santos, on Monday acknowledged the progress of peace talks with the Revolutionary Armed Forces of Colombia (FARC) and reiterated that he remains cautiously optimistic about the process.

"We are moving and wish we could do it faster, but I think that if there really is any opportunity to realize peace, it is this," Santos told RCN radio station.

The president said he is confident that the coming year may herald the end of the conflict in their country.

So he went on "we must wait until the end, because when every point is agreed, then we will sign and announce the end of the war."

In the peace talks, which were held in Havana, Cuba, FARC and the Colombian government representatives followed the six-point agenda, agreed on the 26th of August.

"We will go ahead on all points. That gives us an idea of the seriousness with which these dialogues are being developed, that is to say, when there is something, then we will announce by press release," he added.

This Sunday, the Colombian president said that dialogue should be a process of months and not years, and therefore should not be extended beyond November 2013.

For its part, FARC said that the search for peace in Colombia to end a conflict that has spanned half a century must not have a deadline.

They added that the talks also sought peace with social justice, taking into account the needs and problems of the Colombian people to achieve a solution

Various peace organizations, such as "Colombians for Peace" and "REDEPAZ," have been arguing for a ceasefire during the Christmas holiday period. Reports also surfaced that FARC's leadership was open to the idea.  However, Santos and company shot down the idea.

Throughout the entire process, Santos has said he would not permit even a temporary ceasefire. On the contrary, since news of the peace process went public the government has pledged an additional $5.7 billion to the 2013 defense budget.