The emergence of the so-called "Christmas tree" in South Korea seems to have led to a new wave of friction between the two Koreas. It goes about the tower, located three kilometers from the border with North Korea. The tower is decorated with colored lanterns, which, according to the Associated Press, is seen by Pyongyang as part of psychological warfare. 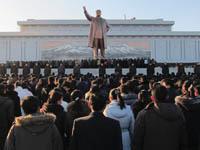 New escalation of relations on the Korean Peninsula?

The tower, 30 meters high, decorated with glowing lanterns, is traditionally lit in South Korea on Christmas Eve and New Year. This "tree" stands on the 155-meter-high hill, which is controlled by the South Korean military. The hill is 3 km far from the border with North Korea, so the "tree" is very well noticeable from the north. This year, it was decorated by Christian organizations of South Korea, and it will stay lit till January 2nd.

As it was expected, the official Pyongyang expressed outrage about the "Christmas tree", the BBC reports. The negative reaction from the North Korean government is understandable, given the events of last year, when the northern neighbor threatened South with "unpredictable consequences" if lights were lit on the tower. South Korea decided not to provoke the unpredictable opponent. The North asked the South not to light joyful Christmas lights due to the death of North Korean leader Kim Jong Il, who died on December 17th last year. The South Korean government fulfilled the request.

In addition, since the luminous tower is visible at a great distance, it serves as an additional stimulus for the border residents of North Korea, who are deprived of regular access to electricity.

This year, Seoul decided to arrange the Christmas show on the border. Quite possibly, it will lead to further escalation of not very peaceful relations between the two Koreas.

In 2004, the two Koreas signed an agreement under which the two countries agreed to cease propaganda activities in the border area. The agreement was in effect for several years, but South Korea began to provoke the North with lighting up the "Christmas tree" against the background of many hostile events and a general deterioration of relations in 2010.

This incident is not the first and likely not the last one. It stands among many other facts of escalating relations between the two Koreas - the conflict that lasts for more than half a century. The uneasy relations between North and South Koreas have become an issue on the agenda of the international community, especially after the appearance of missile and, according to some international observers, nuclear ambitions of Pyongyang.

Experts examined the debris of the rocket and, according to Reuters, concluded that North Korea had the technology of launching 600-kilo missiles at a distance of about 10,000 km. In other words, North Korean missiles could reach U.S. shores.

The Ynha-3 rocket, which North Korea launched, was a 3-stage vehicle. Experts have found only the first stage so far that fell into the Yellow Sea. The fragment weighs 3.2 tons, it is 7.6 meters long and 2.6 meters in diameter, according to the BBC. Ynha-3 became the first rocket of the kind that North Korea launched into space. The launch marked an important step on the way to developing own program for the development of ballistic missiles.

South Korean researchers studied the debris of the first stage of the rocket and discovered that it used fuming nitric acid as an oxidant.  The discovery suggests that the rocket fragment, most likely, belonged to North Korea indeed. The countries with developed missile programs do not use such an oxidant. A spokesperson for South Korea's Defense Ministry said that the welding seams of the rocket were made manually and very primitively. In any case, more detailed technical information will be obtained after researchers find two other stages of the North Korean rocket.

The UN condemned the launch of Ynha-3 as it violated a number of United Nations resolutions that prohibit such launches in North Korea. The resolutions were adopted in response to nuclear tests that North Korea conducted in 2006 and 2009.

Does the international community have serious reasons to be concerned about the development of North Korea's missile program? Opinions differ, as is often the case.

The danger of the North Korean missile program is too much exaggerated?

Park Geun-hye, the new president of South Korea, said, according to the BBC, that the launch of the rocket testified to the fact that South Korea had to face complicated situations. She also said that she was going to open a new page in the relations between the two countries, which would be built on trust and security.

Park Geun-hye will probably have to face many more challenges associated with the state of affairs on the Korean peninsula. The launch of the North Korean long-range rocket is obviously a reason for South Korean authorities to be concerned.

The Russian authorities also expressed concerns about the development of North Korea's missile program. Officials with the Russian Foreign Ministry said in a statement that North Korea should listen to the international community and respect UN Security Council resolutions.

The chairman of the Committee for Defense and Security of the Federation Council, Viktor Ozerov, said that the launch indicated that Pyongyang ignored the protests of the international community. He added that the issue around the nuclear program of the DPRK should be considered only through diplomatic methods. Deputy Speaker of the State Duma, Igor Lebedev, believes that North Korea's rocket launch violates the balance of forces and may thus trigger a larger conflict.

Nevertheless, some experts advise not to dramatize the situation around North Korea's missile program. Konstantin Asmolov, a senior researcher with the Center for Korean Studies, told the BBC that one missile launch was not enough to talk about the dynamic development of the missile program.

One may take a different look at the problem. Why can't North Korea be allowed to possess ballistic missiles and nuclear weapons of its own? Why is Pakistan, for example, "allowed" to have a nuclear bomb, but North Korea is not? Why do other countries have the right to develop their arms, even without any obvious threats to their security, and North Korea, which lives in a hostile environment even in their subjective opinion, is not entitled to develop means of self-defense?

Why is the West (with the U.S. at the head) confident that they have a right to determine the rules of the game in the world and apply these rules selectively? NATO led by the U.S. invade other countries, overthrow regimes, cause chaos on vast territories of the world and at the same time accuse the authorities of North Korea's of aggressive intentions!

Why would South Korea need to light that "Christmas tree", if South Korea is perfectly aware of the possible reaction from the DPRK? It that an emergency?  Does international politics suffer from the tightness of standard thinking at times? Should some countries be referred to as rogue states just because they confidently conduct their own policies and do not listen to gendarmes of the world? The questions are rhetorical.