Iran denounces the actions of enemies that are aimed to cause disputes between the Islamic community, and for that use oil revenues in these countries to massacre Syrian Muslims. 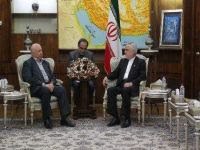 So declared Iran's First Vice President, Mohammad Reza Rahimi, in a meeting held on Thursday with Syrian Minister of Agriculture and Agrarian Reform, Subhi al-Abdolá, in Tehran the Persian capital, which has ensured that the Syrian nation frustrates enemy plots and global hegemonism and will be victorious.

Rahimi reiterated Iran's rejection of any foreign interference in Syria's internal affairs and stressed that Tehran supports the implementation of reforms to overcome the current chaotic situation in the Arabic country.

He also emphasized the need to strengthen economic cooperation between Tehran-Damascus, especially in the agricultural sector.  The Persian official said this can be a positive step to boosting production and creating jobs in both countries.

In turn, the head of the department of Agriculture and Agrarian Reform of Syria thanked the government of the Islamic Republic for its support to reforms and the Syrian nation, which reinforce the spirit of the people of this country to fight the intrigues of the enemies.

Al-Abdolá highlighted the strong will of the Syrians to fight their enemies and assured that in this battle the Syrian people will be victorious.

For about 20 months, Syria is torn between strong and indiscriminate killings, disturbances planned from the outside which worsen with every passing day because of the ongoing violence of the terrorists, whose aim is to force a foreign military intervention.

Syria accuses some western and regional countries for fanning the flames of violence in the country.

Meanwhile, Sergi Lavrov met with Hillary war zone Clinton and the mediator, Lakhdar Brahimi, to discuss the situation.  The US is still trying to bamboozle Russia to its one-sided plans for aggression and regime change, never seeking compromise, but only affecting the pretense of seeking compromise...as in stupid.  You have to be stupid to keep on doing the same thing and hope for a different result like the FUKUS axis does.  It worked in Libya, but it certainly is not going to work on Syria.  No one is into getting burned twice.