The conflict around three uninhabited Senkaku Islands in the East China Sea is gaining strength. China justifies its right for the territory with the geographical discovery of the islands in the 14th century. Japan claims to have annexed the islands in 1895 under the Treaty of Shimonoseki. The tricky move of the Japanese authorities to buy back and nationalize the islands triggered a wave of violence in China. 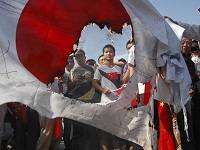 The Senkaku (or Diaoyu) Islands are situated in the controversial 200-mile area between the Japanese island of Okinawa and Taiwan, the independence of which China does not recognize. The islands of seven square miles were privately owned by a Japanese family. Thirty years ago, the U.S. Air Force was renting one of the islands from the family. The United States controlled both Senkaku and Okinawa after World War II. In 1972, the territories were transferred under Japan's jurisdiction. In 1992, the Chinese side stated that the island should be returned to China in accordance with the Cairo Declaration from 1943, which deprived Japan of its conquered territories.

On September 11, Tokyo Prefecture bought the Senkaku Islands from compatriots for 26 million dollars, and the government immediately nationalized them. This unexpected move triggered strong negative reactions from China. China tried to show that Japan had hurt its feelings. After official statements from China's Ministry of Foreign Affairs, the Communist Party of China and "non-communist" parties, China's Association for Science and Technology, China's Federation of Literature and Art, Chinese Writers' Association and other public organizations joined the protests.

The Chinese people do not sit idly either. Demonstrations and riots have swept across more than 100 cities of the country. The Chinese government has never allowed mass riots after the student demonstrations on Tiananmen Square in 1989. This time, however, the government let people release their steam. Multiple attacks on Japanese firms, restaurants, department stores and Japanese citizens were reported throughout China over the weekend. Representatives of Panasonic stated that the corporation was leaving the Chinese market after its factory in China had been destroyed as a result of the riots. Japanese schools are closed, Japanese citizens cancel their trips to the Celestial Empire. The US also got the taste of Chinese anger. During the protest action outside the Japanese Embassy in Beijing, the crowd started chanting F ... k USA! The looters smashed Rolex and Christian Dior shops, kotaku.com.au website said.

On Friday, China urgently convened a symposium on the Diaoyu Islands. Senior expert with the Institute of Contemporary International Relations, Ji Zhiye, described the actions of the Japanese government as the "weakening of the national power of Japan." That is something that one can not agree upon. One may talk about the tricky move of the Japanese or the mistakes of the Chinese authorities, but it is certainly not the matter of weakness of Japan. The Land of the Rising Sun has a patron, whom they now have to see in action.

It goes about the United States, of course. Japan and the US have an agreement on mutual cooperation and security assurances. U.S. Secretary of Defense Leon Panetta arrived in Tokyo at the weekend to calm the ally down. Panetta said that even though Washington does not take anyone's side in Tokyo's territorial disputes with its neighbors, the United States will fulfill its obligations under the treaty of alliance with Japan. According to Panetta, the USA will come to help Japan if the country is attacked. He set out a hope that it would not happen. However, Panetta announced the deployment of a second ground-based radar station in Japan for ballistic missile defense. Although Penetta assured that it was done against the North Korean threat, no one in China believed that. Earlier, the U.S. State Department confirmed that the United States considered the disputed Diaoyu Islands (Senkaku Islands) the territory, which Japan and the United States should defend together.

Some may find the dispute over the three islands absurd in light of more serious problems that the two world leaders face. However, one should bear in mind the fact that the two countries have little natural resources of their own, while the population density in the habitable land is one of the highest in the world. Oil and gas fields were supposedly discovered underneath the islands, and it was the discovery of hydrocarbons that aggravated the bilateral relations. That could be possible. Natural resources are not eternal, and future wars will be the wars for natural resources. The trend is already evident: there are conflicts around the Arctic shelf, the Falkland Islands and the South China Sea. At the same time, people are also concerned about the issues of national pride and the interpretation of history.

The conflict has historical roots. The Chinese remember Mukden, or the Manchurian Incident of 1931-1933, when the imperial army of Japan invaded Northern China. The conflict then developed into a military campaign of WWII in 1937-1945. The Manchurian incident was based on the belief that the survival of the Japanese nation was possible only under the condition of its violent unilateral hegemony in East Asia to suppress national and international interests of other countries. The Chinese believe that Japan's aggressive mentality has not been destroyed, unlike that of Germany. Moreover, it is China's belief that Tokyo will never fully reconcile with the losses.

In the meantime, the large-scale conflict has struck a serious blow on the bilateral trade relations, in spite of the fact that the trade volume between the two countries has tripled over the past decade to more than $340 billion. Neither party benefits from the conflict, but Japan's losses may be considerably larger, experts believe. The closing of several car-making factories of such giants as Toyota, Honda and Nissan Motors in China could lead to larger economic losses than those caused by the disastrous earthquake and tsunami in March 2011.