By chanting slogans like "No to war" and carrying banners condemning Israeli regime authorities, participants in this protest expressed opposition to the interventionist policies of the regime in Tel Aviv. Not all Israelis support the belligerent policies of the Israeli Government, which is being accused of playing with people's lives.

A group of Israelis gathered Sunday outside the house of the Minister of Military Affairs of the Israeli regime, Ehud Barak, in Tel Aviv, to protest against a possible attack on Iran.

The outraged Israelis, concerned about a possible Israeli attack against the Persian country, have demonstrated the past three weeks against Barak at his house, to warn of the consequences that an attack on Iran could lead to.

By chanting slogans like "No to war" and carrying banners condemning Israeli regime authorities, participants in this protest expressed opposition to the interventionist policies of the regime in Tel Aviv.

Ehud Barak said on August 9 that the Israeli regime had decided "to stop Iran from becoming a nuclear power and all options are on the table regarding Iran. When we say it, we mean it."

"They are playing with human lives ... one thing is certain, if we attack Iran, we go into war. We cannot drag the Israeli (regime) to war," reported the Israeli daily online, Ynetnews, citing Yifat Solel, one of the protesters.

"We have demonstrated in front of the house of the Minister of War, Ehud Barak, and we will continue to demand ... to stop this madness," said Naomi Saroussi, another protester.

On many occasions, the authorities of the Israeli regime have raised the possibility of an attack on Iran. Those authorities hide behind the unfounded accusation that Tehran pursues military objectives with its nuclear program, a free accusation formula for a regime that has more than 200 nuclear warheads.

Iran defends its right to develop a peaceful nuclear program under the regulations of the International Atomic Energy Agency (IAEA) and the Nuclear Non-Proliferation Treaty (NPT).

Furthermore, the Iranian authorities have claimed, repeatedly, that any threat or aggression against it will have a strong response. 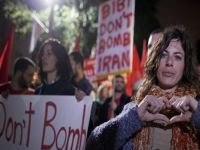