USA sick and tired of enduring freedom in Afghanistan

The situation in Afghanistan has completely gone out of control of the coalition forces. Taliban fighters organize public executions of the locals; the trafficking of human organs is flourishing in the country; the drug trafficking is breaking all records. It was said that foreign forces would be withdrawn in 2014. Experts assure us that it will be beneficial for both the U.S. and Afghanistan. 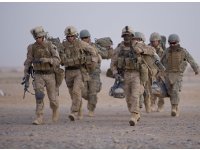 It has been announced recently that the Pentagon decided to bring to justice the soldiers who took part in the burning of the Quran and filmed the abuse of the bodies of killed Talibs. American servicemen burnt the Quran and other religious texts in February 20, 2012.  The video that shows the desecration of the bodies of Talib fighters, was uploaded on YouTube in January of 2012. Now it became known that the soldiers involved in the above-mentioned incident were brought to disciplinary action.

However, The New York Times reports, the names of the guilty have not been announced. The U.S. military also managed to avoid the criminal prosecution, although Afghan officials demanded an open trial for the guilty. The results of the investigation conducted by the Pentagon, was made public on August 27. The investigation concluded that the actions of the soldiers were not malicious, that  they supposedly did not want to offend the feelings of the faithful Muslims. Note that disciplinary action may imply demotion, a fine, additional responsibilities in military service, or a prohibition to leave a military base. Those shameful incidents are not the only of sad consequences of the invasion of NATO troops, particularly the U.S. troops, to Afghanistan.

From October 7, 2001 and up to the present day, U.S. forces conduct the military campaign in Afghanistan called "Enduring Freedom." The entry of NATO troops in Afghanistan was a response to the terrorist attack in the United States, conducted (as the official version says) by al-Qaeda terrorist network on 11 September 2001. The Americans claimed that members of the Taliban movement, who controlled most of Afghanistan, were hiding the leader of al-Qaeda, Osama bin Laden. The Americans presented the Taliban an ultimatum demanding the extradition of the prime suspect, but were refused. This led to the invasion of the international contingent to the territory of Afghanistan, with the United States playing the main role in the campaign.

The main objectives, which the US officially declared, were to capture the members of Al-Qaeda, put them on trial, overthrow the Taliban regime in Afghanistan and liberate the country from their influence. On December  7, 2001, the main city of the Taliban fell - the capital of the country Kabul. As a result, the Taliban regime was overthrown within two months. However, the Taliban movement was not destroyed.  During the war, they conducted a lot of military attacks. In April 2008, they attempted to assassinate Afghan President Hamid Karzai.

The international coalition forces failed to establish order in Afghanistan. People, including civilians, continue to be killed in the country almost every day. Moreover, the current situation in Afghanistan is not in favor of the Americans. The coalition losses in the war already made up nearly 2,500 soldiers; the U.S. lost about 1,600 men.

But the main and a very sad result of the military operation was a sharp rise in the production of drugs in Afghanistan, as well as the growth of drug trafficking from Afghanistan to other countries, including Russia. According to the Russian Federal Service for Drug Control, about 90% of the world's heroin is produced in Afghanistan. The region turned into a "monopoly" in the production and sale of drugs during the war years. The production of cannabis increased nearly 12 times . Over the past 10 years, the country produced a record amount of drugs in the amount of almost one trillion dollars.

With this state of affairs, it is perhaps difficult to underestimate the abilities of the U.S. to control the situation in Afghanistan. It seems that the United States understands this too. Thus, according to surveys, about 60% of U.S. citizens support the withdrawal of U.S. troops from Afghanistan. The complete withdrawal of the troops and the transfer of powers to local authorities will be implemented by the end of 2014.

Numerous incidents involving NATO servicemen and Talibs demonstrate a very limited ability of the U.S. to control the situation in Afghanistan. On August 27, Talibs beheaded 17 people, including two women, who took part in a concert of folk music in Afghanistan's Helmand province. According to the Taliban, the musicians were punished for cooperating with the government. According to police, they were punished because there were women participating in the concert. The Talibs strongly oppose women's participation in such events.

Earlier, on August 18, U.S. forces launched a series of air strikes on the Taliban-controlled territory of Afghanistan, killing about 50 militants. Talibs said that the Americans killed nearly ten civilians during the operation. On the night of August 28, 2012, a US helicopter crashed as foreign troops were conducting a special operation to arrest three militants. According to eyewitnesses, the helicopter was shot down from the ground. Taliban fighters stated that it was them who shot down the helicopter. The crash killed all on board.

As a result, it just so happens that the Taliban was not destroyed in the course of Operation Enduring Freedom. Quite on the contrary, their criminal activity became rampant. Numerous crimes committed against women, who "dared" to go out without a male escort, can serve an example to that. In addition, a wave of murders and kidnappings conducted to sell human organs abroad has swept through the country. As for the U.S. military, they usually do not walk along the streets of even large cities alone, but prefer to travel at high speed in military vehicles armed with machine guns.

There are also reports saying that the USA delivered the seeds of genetically modified products to the hunger-stricken Afghanistan. Cultivating those plants in Europe is forbidden; nothing is known about their influence on human health.

This war is an enormous financial burden for America and its taxpayers. The war depletes the country's budget, diverts resources away from solving more important domestic problems, and reduces the defense power of the U.S.

As everyone can see, U.S. troops are unable to maintain law and order in Afghanistan. According to experts, the termination of the U.S. presence in Afghanistan would erode al-Qaeda's view of America's intention to establish its reign in the Islamic world. Reducing the presence of U.S. military forces in the Islamic countries will give more safety to the U.S. The terrorists will not be inspired to commit terrorist acts inside and outside the U.S.

In addition, continuing the war with no real chances for victory leads to the destabilization of the entire region, particularly Pakistan. The Taliban will not seize power in Afghanistan after the withdrawal of the US troops: they do not have the support of the Afghan population. Thus, the withdrawal of the U.S. troops from Afghanistan will be only beneficial for the United States and its allies, and is unlikely to worsen the situation in Afghanistan.