People of Israel opposed to war games with Iran

Many Israelis have recently started to express their dissatisfaction with the foreign policy of the government. Their greatest concern is the impending military action against Iran that could lead to serious casualties among the civilian population in the event of a retaliatory strike by the Iranian armed forces and their allies - the insurgents of Hezbollah.

Protests against the outbreak of a war with Iran began in the country when in the spring of 2012 designer Ronnie Edri posted on his Facebook page a photograph to renounce the idea of ​​bombing Iran's nuclear facilities. The address was primarily for the ordinary citizens of the Islamic republic. "We are not going to bomb your country. We love you," wrote Edri and his wife, thus expressing their disagreement with the official Jerusalem. 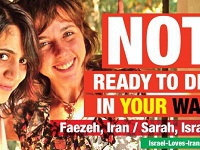 A week later, the stance of the young designer and other Internet users was trumpeted in all Israeli media. "The campaign suddenly had a great response, both in Israel and in Iran," said in March of 2012 information portal Newsru.co.il.

"Edri admitted that he was stunned when his page was visited by that many Iranians: they left comments under his posters and expressed understanding of his position. Soon on his page response posters began to appear where smiling Iranians were depicted with the inscription: "My Israeli friends, I do not hate you, I do not want war, I love peace!" continues the publication.

Ronnie Edri, who is not a public person, perhaps unwittingly, revealed the sore subject of the Israeli society. No one expected that this campaign will be supported by over 40 thousand people. It became obvious that not only Jerusalem and Tel Aviv, but Tehran as well is tired of the military hysteria. On March 24, the largest demonstration in the heart of Tel Aviv took place, directed against the bombing of Iranian nuclear plants. The rally was attended by up to two thousand people. "No to War with Iran," "Bibi and Barak, the war is not a toy," "One, two, three, four - do not want another war," demonstrators' posters read.

Spring protests inspired the supporters of a peaceful resolution of the Iranian crisis who became to actively express their position. In mid-August, the "left" were able to hold a few demonstrations demanding to prevent a military operation against the regime of the ayatollahs. Despite the fact that the number of those present in the center of Tel Aviv did not exceed a few dozen people, the rally was covered by the media.

"The residence of Defense Minister, Ehud Barak, located in the government quarter of Tel Aviv, for the third consecutive day witnessed rallies organized by the members of the Left parties. They gathered in protest against a war with Iran. The demonstrators shouted slogans requesting to prevent an attack on Iran and called Defense Minister Ehud Barak to show "firmness and soundness of mind" in the current situation," the website of channel 7 ITV reported. During a demonstration on August 12, a 70-year-old protester raised a poster where Barak was depicted in the uniform of a Nazi officer. Shortly after, the police of Yarkon District arrested the demonstrator, said Israland portal.

Finally, on August 23, the Israelis held another rally in Tel Aviv, designed to warn against hasty military action that could result in disastrous consequences for the country. According to local media, the demonstrators lay down on the pavement, representing the dead and wounded in the streets of the city after a retaliatory missile attack from Iran.

However, the "right" activists, traditionally voting in elections for the party of Netanyahu "Likud", from the beginning regarded the current campaign of Israeli pacifists as a betrayal. The potential threat from Iran is quite significant, and the aggressive statements by the leaders of the Ayatollahs' regime show their true intentions towards Israel. The "right" believe that there is not much time left for a preemptive strike against Iran's nuclear facilities.

The official opinion of Tel Aviv was announced in June by the Minister of Defense Ehud Barak: Israel in the near future does not plan to attack Iran. "On the other hand, we will not wait for the outcome of the negotiations, especially if they last a few years. I do not want to set a deadline for the international community, but will not wait forever," Barak was quoted by the news agency "Cursor ". In this situation, strategic planning minister Moshe Yaalon has made it clear that Israel had high hopes for Washington that has significant diplomatic and military options to stop Iran's program for creating atomic weapons.

However, Tehran looks at the threats of force use by the Israelis and Americans skeptically. "It is our duty to respond to these threats seriously, but Israel is not in a situation to afford such an operation," said head of the Foreign Ministry of Iran, Ali Akbar Salehi.