"Intervention in Syria is a catastrophe," says Lavrov

The Foreign Minister of Russia, Sergei Lavrov, said in an interview with Sky News Arabia that Russia was surprised by the U.S. desire to resolve the crisis in Syria by ignoring the United Nations Organization. Lavrov denied that Moscow supports Bashar Assad and said that a decision on the resignation of the Syrian President can be taken only by the citizens of that country.

After a meeting in Geneva between representatives of the five member countries of the UN (United Nations) and others bordering Syria, a spokesman for the U.S. State Department, Patrick Ventrell, said the absence of a resolution does not impede the actions of the United States.

"Three times Russia and China blocked the resolutions on Syria in the UN.  We tried to convince them to change their position, but could not," Ventrell said last June. "We have to continue working under the aegis of the United Nations, but we also have a broader strategy that should be respected.  We do not intend to stop doing our job just because there is no resolution," added Ventrell.

"The United States has expressed its intention to intervene, ignoring the UN Security Council," countered the Russian Foreign Minister, Sergei Lavrov, during an interview with Sky News.

The minister said the decision on the resignation of Bashar Al-Assad can only be taken by Syrians.

"I believe that the statements from Washington and other capitals that the declaration of Geneva is a dead letter are completely irresponsible. This document represents the most important consensus reached in cooperation with western countries, Russia, China, Turkey and the main Arab countries," said the Russian minister.

Lavrov added that there is an extremely complex ethnic and religious mix in Syria.  "Minorities who gather around Assad expecting help in protecting their rights, are also part of the Syrian people," he said.

During an interview with Sky News, Lavrov also denied rumors that Russia had signed new contracts with the Syrian government to supply military equipment. "As we have stated repeatedly, we have no intention of signing new agreements," Lavrov added.

Previously, the assistant secretary of state for European affairs and Eurasians, Philip Gordon, had criticized Russian arms sales to Syria. 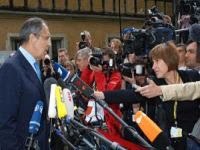