Tanzania to be a traitor to wildlife? And humanity?

The Maasai people are to be removed from their traditional lands so that a handful of Middle Eastern Kings, Princes and other Royals can have a private hunting ground in Tanzania? After the behaviour of the Middle Eastern monarchies in Libya and Syria, would anyone be surprised? And what about the rights of the animals? 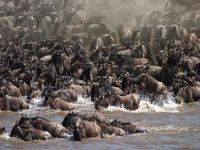 The message sent to Pravda.Ru by Rivaldo Cardoso of Avaaz is the following:

"Kings and princes of the Middle East are about to force the removal of more than 48,000 people from their land in Tanzania, to make way for a complex of animal hunting funded by private companies".

It does appear, however, that the Tanzanian president Jakaya Kikwete has stated that negative media coverage may affect or reverse the decision. For this reason an international campaign has been set up to persuade President Kikwete to veto the expropriation of lands.

Middle East, super-rich royals, so loyal to Allah in their local Mosques...does anyone hear of the stories coming out of Casablanca where these pious people holiday? Well there's a good lead for free, a wealth of information.

So, in Tanzania, the local tribespeople can be removed from their lands, in their tens of thousands, so that a handful of pigs from the Middle East can have a hunting ground. If it happens, the Kikwetemust go down in history as one of the worst African leaders.

If it does not, then those in Tanzania who have been involved in this shocking lack of respect for local and world cultural heritage should be publicly named and shamed.