Turkey has established a camp for suspicious "refugees" near the Syrian border with the province of Raqqa (north) in order to house terrorists, train them and infiltrate them into the neighboring Syrian nation, an official source reported on Monday (30th).

Attempts by armed groups to occupy the Syrian city have failed.

They created a rearguard for the armed terrorist groups, including the installation of a hospital, where one hundred Turkish health professionals labor, and which will serve patients from three districts in which the structure was divided, says a report by the Syrian news agency, SANA.

There are currently few refugees in place, yet it is estimated that the center will serve as protection for mercenaries and armed terrorists would return there after performing actions on Syrian territory, indicates the source.

On the other hand, the Arab Syrian army troops foiled an attempted infiltration of armed groups from Jordan into the village of Tal Shihab, located in the province of Daraa, more than 100 kilometers south of Damascus.

During the confrontation, attackers lost several men and others were wounded before returning to their starting point.

Likewise, in the early hours of Monday, several attempts at infiltration were aborted by armed groups from Lebanon into villages in the area of Tal Kalakh, the central province of Homs, causing them significant casualties.

These attempts were accompanied by intense gun battles and bombings by terrorists, officials said. 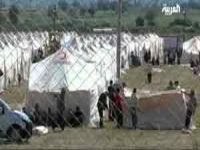