The spokesman for the Ministry of Foreign Affairs of the Islamic Repblic of Iran, Ramin Mehmanparast, qualified as anti-Syrian the conspiracies and intrigues carried out by the U.S. and the Israeli regime against the Arab country.

During a meeting on Tuesday evening with the experts and journalists from Chinese media in Beijing, the capital, the Persian diplomat said that "after Egypt changed its position and put aside president Hosni Mubarak, a U.S.ally the number one opponent of the regime of Israel in the region, Washington intervened in Syria, destabilizing the situation and creating insecurity in this country to undermine the Syrian resistance line "

Referring to the fact that the Americans have failed to produce a civil war in Syria, said that "according to its new plan, Syria's enemies try to supply the terrorist groups more than before, supplying arms and money to fulfill their plans in this country".

Similarly, the Persian Foreign Ministry spokesman claimed that "why do the Americans show no reaction to the popular movements currently taking place in Yemen, Bareín and Saudi Arabia ?, The answer is pretty clear, because they only seek to weaken the resistance of the Syrian people and safeguard the security and stability of the regime in Tel Aviv in the Middle East. "

Emphasizing that the Syrian government and the nation are currently defending their  national interests and territorial integrity, he argued "the situation in Syria, is a large-scale war against an independent country."

The Persian diplomat reiterated support for the peace plan of Kofi Annan, special envoy of the United Nations and the Arab League in Syria and said "the Islamic Republic of Iran believes that the only solution to the Syrian case is to prevent any foreign interference in this country and the supply of weapons to terrorist groups and then discuss in a peaceful environment where partners can address their demands and pave the way for reforms. "

Moreover, the Persian stressed the importance of the Middle East for the U.S. and its allies, saying that the existence of large oil and gas sources in this region and for fear that the security of the Israeli regime is not affected, Washington does not want to lose control over this region.

Commenting on the new wave of Islamic awakening and popular movements that are taking place in the region, he said that "the peoples of the region want to be independent and away from the U.S. and through its surveys, one by one trying to overthrow puppet dictators of imperialism. " 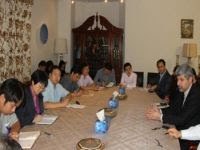