When British Queen Elizabeth II made a "historic" visit to Northern Ireland and even shook hands with former militant Martin McGuinness, who had allegedly killed her relative, it seemed that the Irish Republican Army remained forever in the past. However, on the eve of the Olympic Games terrorists presented an unpleasant surprise to the Queen. 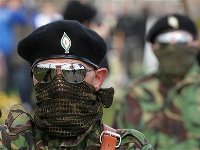 Three of the four terrorist organizations of Northern Ireland announced their merger in order to revive the Irish Republican Army (IRA). It will consist of several hundreds of armed militants of the Real IRA, the Republican Action Against Drug movement (RAAD, operating in the city of Derry), the coalition of independent armed groups (so-called "Republican nonconformists") and small groups in Belfast and in the countryside. Only the Continuity IRA will remain independent.

This information, together with the statement of intention to intensify terrorist attacks was delivered to a journalist of British newspaper The Guardian at a secret meeting, held at the Irish border. The members of the new association assert that they "act together and under the unified leadership." "In recent years the establishment of free and independent Ireland was delayed and eventually failed due to refusal of the leaders of the nationalist movement to struggle," the statement said. Probably, it goes about the former leader of the "old" IRA, the above-mentioned Martin McGuinness, who chose a peaceful political process, established Sinn Fein party and was appointed deputy prime minister of Northern Ireland.

Irish separatists stress out the need for armed struggle against the British Crown and Britain's military presence in Northern Ireland. The new old IRA plans to intensify attacks on security forces and other symbols of the British presence, such as offices of Ulster Bank. There can be explosions in Derry in 2013 - during the Days of British Culture, writes The Guardian. The organization will be subject to the Constitution of the Irish Republican Army from 1916, claimed the militants, whom the British newspaper shamefully called dissidents. Although when it comes to "dissidents" in other countries, the Anglo-Saxons do not hesitate to call them rebels and oppositionists. "The need for armed struggle will disappear only when the British military presence in our country ends, their armed militia is disbanded, and London, under international supervision, no longer interferes in political affairs of our country," the separatists said.

Among the "Republicans," who joined the new organization, are the people responsible for the murder of Catholic constable Ronan Kerr, which took place in April 2011. In general, the above-mentioned groups have placed dozens of bombs in private cars belonging to police officers since 2007. The "Real IRA" exists since 1990. The organization assumed responsibility for the bombing in Omagh (County Tyrone), which killed 29 people. The British press expressed special concerns about the RAAD group joining the IRA. The group takes revenge on the drug dealers in Derry. The danger is explained with noble motives that hide other motives - separatist ones. The formation of the new structure became the first example of the union of the adversaries of the British rule after the "Good Friday Agreement", signed on April 10, 1998 by British and Irish authorities. The agreement was ratified by the Parliament and approved in a referendum.

The government of the United Kingdom was relaxed in its reaction to the news - they were probably too busy with the provision of security at the Olympics. The army, the police and MI5 have been keeping the dissidents under strict control during the recent years; impressive amounts have been allocated from the budget for their containment.

Local authorities took the news of the re-establishment of the IRA with anxiety. Secretary of State of Northern Ireland, Owen Paterson, told lawmakers that the republican paramilitary groups continued to carry out cowardly and heinous attacks on the members of their community. "RAAD conduct regular violent attacks against people in Londonderry, they attack police cars, throwing homemade bombs at them. In June, there were two such attacks," the Londonderry News quoted Paterson as saying.

The goal of the IRA is to achieve complete independence of Northern Ireland from the United Kingdom, and to reunite with the Republic of Ireland. In its work, the IRA relies on the support of the Catholic population. Its prime enemies are those who support the preservation of the province as a part of the United Kingdom.

The IRA is opposed to British security forces and Protestant paramilitary groups. IRA's signature attack starts with a telephone warning 90 minutes before exploding a car bomb. The warning reduces the number of victims, but still serves as a demonstration of force. According to Paterson's report, the new IRA changes its signature.