US and France responsible for terrorism in Syria

"The U.S. and France, mainly responsible for the shedding of innocent blood in Syria" 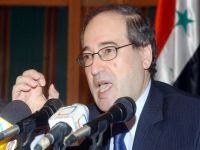 Syrian Deputy Minister of Foreign Affairs, Faisal al-Meqdad, said Tuesday that the U.S. and French governments are responsible for the bloodshed of innocent people of Syria.

Al-Meqdad made ​​these remarks in an interview Tuesday on "Russia Today" television, referring to the support of these countries for armed terrorist groups.

The Syrian top diplomat stressed that the United States and France have equipped terrorist groups with modern weapons in order to create an unstable situation. Washington had confessed earlier that they have sent weapons to armed groups in Syria.

Referring to the peace plan of the Special Envoy of the United Nations Organization (UNO) and the Arab League (AL), Kofi Annan, Deputy Minister of the Arab country said that "the Syrian government has worked for the peace plan and continues to do so."

He also referred to the recent clashes between the Syrian army and armed groups in different parts of Syria, and said that the Syrian army has the ability and power to stabilize and restore peace and tranquility to the country.

On Saturday, the head of the observer mission sent to Syria, Norwegian General Robert Mood, informed of the temporary suspension of the mission, which aimed to monitor compliance with the ceasefire specified in the Annan peace plan.

One of Mood's main arguments to suspend the mission was the fact that observers were in danger in the Arab country due to terrorist groups.