The regime of Israel is considering, apparently, the possibility of carrying out a military strike against Syria.  They are making the claim that the government in Damascus might be using chemical weapons against the population, Press TV reported Tuesday. 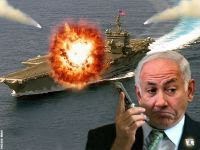 Recently, the regime in Tel Aviv expressed concern regarding the use of chemical weapons in Syria, it insisted that such weapons could fall into the wrong hands, and even could be used by the Syrian government to attack Israeli forces.

The regime of Israel has decided to use this pretext to justify a possible military strike against Syria, despite the fact that this could trigger a larger conflict in the region.

A few days ago, Ayoob Kara, a senior Likud member of the Israeli regime, led by Prime Minister Benjamin Netanyahu insisted, while speaking to Israel Radio, that the Syrian government has used "chemical weapons against men, women and children" in recent unrest in the Arab country.

Meanwhile, recent reports indicated that the Syrian opposition groups that seek to destroy the government of Syrian President Bashar al-Assad, are planning to use chemical weapons that they have acquired from fellow terrorists Libya.

According to a report released last June 10 by the Russian newspaper, Russia Today, the armed terrorist groups in Syria have planned to use chemical weapons against civilians and then blame Damascus for the atrocity.

Some analysts have noted that the Israeli regime's plan to attack Syria has many similarities with what once came up with Washington on Iraq in 2003, according to which it was falsely claimed that Baghdad possessed weapons of mass destruction and, therefore, the Arab country should be attacked.

In recent months, Washington and Tel Aviv regimes have been blamed on several occasions by the Syrian Government for the bomb attacks and massacres of civilians taking place in the Arab country. Damascus has indicated that armed terrorist groups are the real perpetrators of violence.

In light of these accusations and threats, should such incidents occur, with the usual hypocritical screams "something has to be done" one might consider their history of countless false flag attacks, a track record that cannot be denied.

Now why the government of Syria would attack its own population by any method defies even the most simple logic.  However, in the twisted western mind, so saturated with pure filthy demonic evil, this seems to be a reasonable accusation to make...time and time and time and time again.

Washington has also made declarations about specific areas where they "expect" the government of Syria to attack, which should be a tip off of what instructions they are giving their proxies.  After which, of course, they will be jumping up and down at the UNSC for a no-fly zone.  Libya has taught the world community exactly what that means, an excuse for an all out attack and invasion.

Russia and China must stand firm in not allowing this to happen yet again to another country and people.  One egregious hoodwinking should be sufficient for the wise.  NATO aggression on Libya has left an indelible impression for posterity.

Translated from the Spanish verion and appended by: